The Gath Tell itself has a remarkable resemblance to ‘Edoras‘ (Mt Sunday) on the Rangitata River of New Zealand of LoTR Rohan Riders fame. They are about the same length and height and shape, except Gath has several thousand years of human habitation on it (being Old World) while New Zealand’s ‘Edoras’ has none at all, other than a few horsed shepherds meeting on Sundays for a beer (thus “Mt Sunday”). While Edoras had Rohan cavalry galloping about in the minds of LoTR fans, Gath had real Crusader Knights resident on the Tell (there was a crusader castle on the top –Blanche Garde– before it was attacked and destroyed by Saladin).  Both also have a river running across their northern frontage; the NZ one flows deep and strong all year and is full of Chinook salmon transplanted from Sacramento, CA; the Elah Valley brook at Tell es-Safi is a dry wadi for several months of the year. 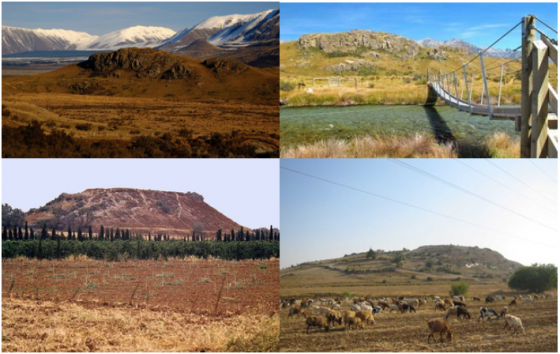 Below is a sample of the onsite food I mentioned last post, brought in for us from the kibbutz kitchens. I sometimes have to ask what the wrapped foods are as the packaging is in Hebrew (after consuming some cream cheese instead of yoghurt!).  We start at 5am, eat breakfast at 9am onsite and have a melon break at 11am (watermelon and cantaloupes). They are adored for the water content.  I drink about 5 litres a day and in Israel you pee only once a day, as most of the water you drink is lost through dripping sweat (heavy droplets) and evaporation.  Dehydration is a constant danger and several of our team are off sick with tummy bugs or hospitalised with drips for heat stroke or dehydration. 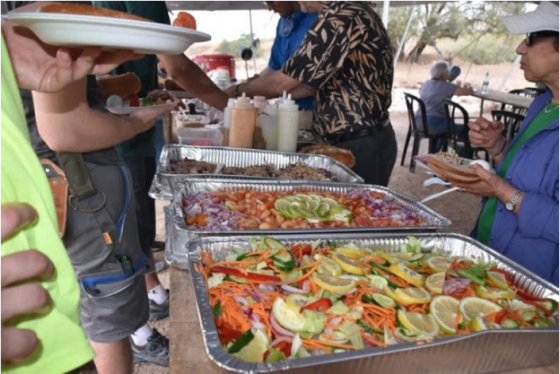 Below: some more images of the Gath Tell. 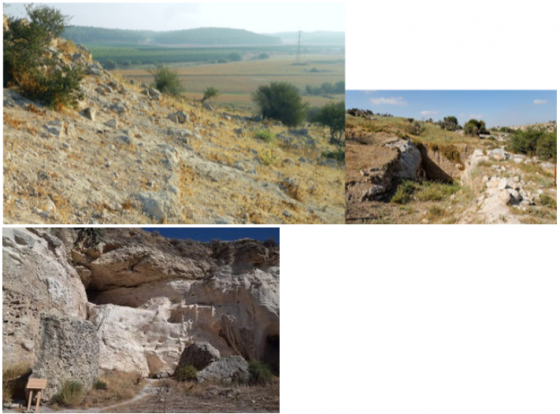 Above, the white limestone chalk cliffs of Gath, like the white cliffs of Dover or Weka Pass in Canterbury (NZ) leant the name to the Crusader castle atop the tell –Blanche Garde (“white guard”).

Below: Aren Maier (looking east up the Elah Valley from the top of Gath) describing the history of the area. If you look at the aerial photo below (and we use drones at Gath to assess data from the excavated squares and how it all fits into overall schematics) you can see how large the area of Gath is and the small amount actually excavated since 1996.  Many discoveries await us and we make many in Weeks 1-2. 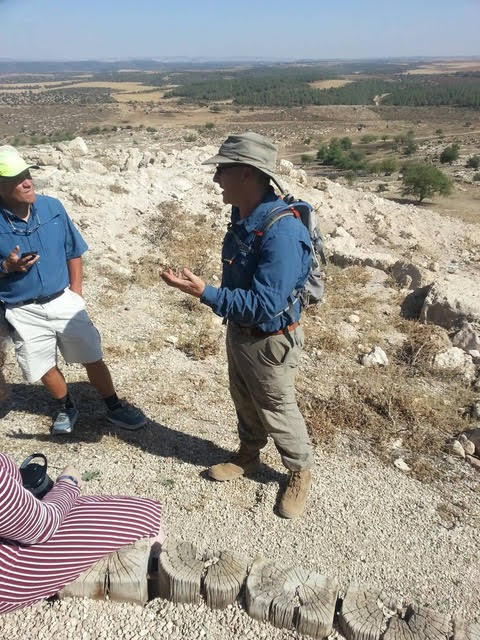 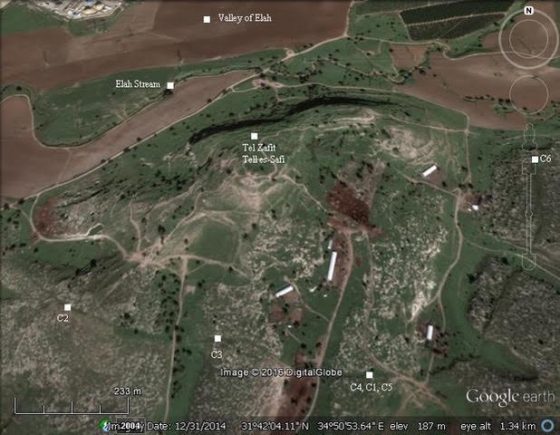 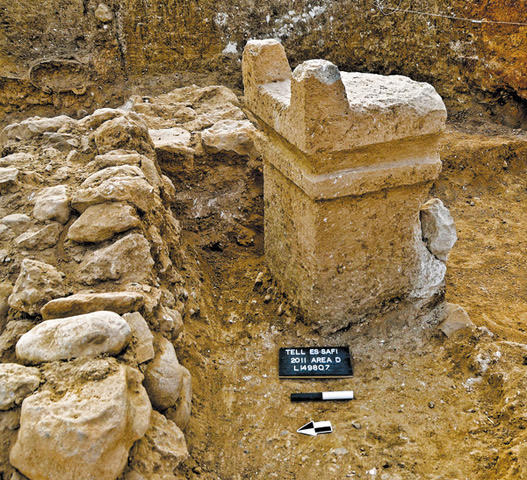 Above:  a remarkable discovery in 2017, a two-horned altar piece. It emerged from the ground, horns first and was excavated down with the soil removed ‘basket’ by ‘basket’, trowel by trowel to reveal this magnificent artefact, now removed from the site and safely stored in a lab for further study, publication and display.  Perhaps the third and fourth horns were broken off, or never made? But what is unusual is there is no evidence from the top plate that this altar was ever used?  Was it just erected in place the day Hazael attacked? Why was it not used?

Each year the site has a t-shirt.  On the back it features the most remarkable find of the season.  The altar was the 2018 shirt.  We found a remarkable scarab within the first few days, with a clever baboon etched in to it (below).  Perhaps this will be the t-shirt for 2019, but with several weeks still remaining, the discoveries are coming thick and fast, and perhaps the baboon scarab will be surpassed for t-shirt honours by some other remarkable artefact. 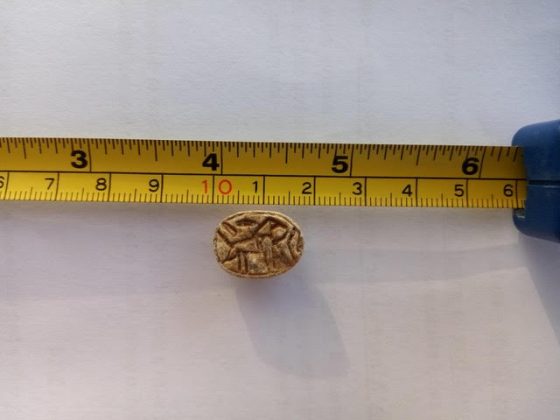 Our archaeological ‘baskets’ are actually plastic buckets, but the archaism remains from the archaeology of the late nineteenth and early twentieth centuries when woven baskets were used to remove soil. It’s a term that has stuck. The plastic bucket ‘baskets’ take a beating and have to be replaced fairly readily. We use black ones for soil, blue ones for pottery finds, and other colours (orange, lime green) for special finds such as objects of special interest such as: bones, knives, shells or human-worked stones (all of which pass through my hands).

These are the sorts of things we are looking for. 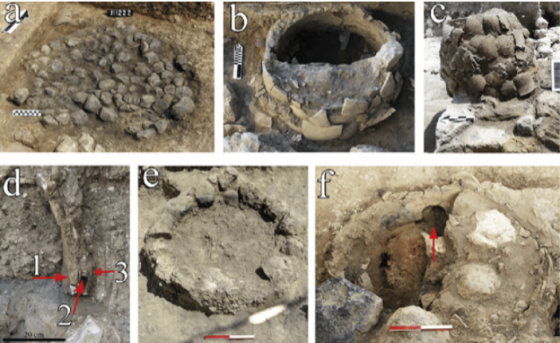