The New Zealand Medical Association has called for a ban on selling alcohol in supermarkets, saying that having it next to groceries and food normalises a dangerous drug.

Wine and beer have been widely available in most supermarkets around the country since 1990, although spirits can be bought only in bars and off-licences.

The New Zealand Medical Association (NZMA) said having alcohol in supermarkets normalised the drug, and made buying it cheap and easy – meaning people put a bottle of sauvignon blanc in their trolley alongside their bread, milk and toilet paper without a second thought.

Yep it’s great. And the vast majority of those people are not the problem drinkers. They’re parents with busy lives who appreciate being able to buy a bottle of wine to have over dinner, with their food.

Jackson said allowing supermarkets to sell alcohol was an attempt to convert New Zealanders to a Mediterranean drinking culture – having it available “everywhere” – that had backfired badly.

“When wine came into our supermarkets in 1989 you can see this exponential growth in wine consumption … we are Anglo-Saxon and you can’t change cultures overnight, and having alcohol widely available did not change our culture, it harmed it.”

The wowsers constantly paint the liberalisation of 1989 as a disaster. But look at this data from Stats NZ about alcohol available for consumption per capita. 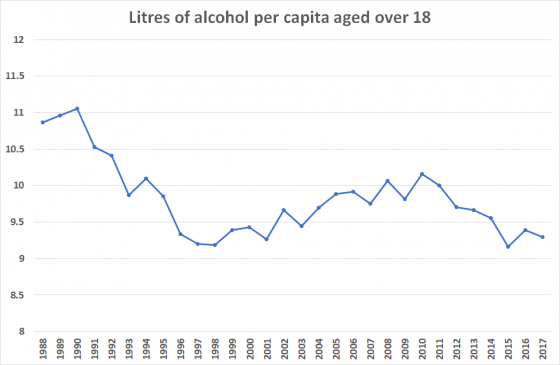 So alcohol per capita actually declined for six years after the liberalisation. It then rose slightly from 2000 to 2010 and has been declining since then.