No Right Turn compares our refugee numbers with Australia and finds that they take in far more per capita than NZ.  He says that the Immigration Service is in denial with their claim NZ has a high refugee rate per capita.

I wondered who was correct, so I went to the UNHCR website and pulled out the latest stats on actual refugees over the last year for each country, and compared it to their population.  I pulled out the main European countries. 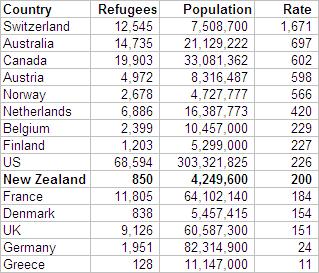 This does show us towards the bottom end.  Now one has to be aware of certain factors in each country.  For example Germany does not take many legal refugees but has millions of illegal immigrants or economic refugees, so they probably feel they more than do their bit.

I generally support an increase in our refugee quota, but with a couple of disclaimers: