Had a very fun night last night. I had rsvp’d to the Wellingtonista Award Night. The Wellingtonista is a great read – excellent example of a community blog, and always fun. So I figured their awards would be fun, plus Public Address were having a celebrity quiz night set in when Muldoon was Prime Minister era.

I had a incredibly frantic day and was 75% keen to just go home and sleep, but felt guilty that as I had rsvped, that would be impolite. So I went along at 7 pm.

Around five minutes after I got there, Russell Brown comes up to me and says something along the lines of “Sean Plunket can’t be located, so how would you feel about filling in for him”. Now this had a bad case of deja vu. I initially appeared about as enthusiastic as one would be for fire walking, but did ask exactly what role was Sean meant to be playing, and upon learning it was just to be a member of one of the teams, I happily agreed.

The other team, labelled the left team due to their position on the stage, was led by Marion Hobbs. Our team captain was Graham Reid, plus myself and Stephanie.

Russell has the actual questions in the quiz over at Hard News. Go give them a go.

We won the quiz. One section was naming songs from the 1970s played backwards. I couldn’t even get them played forwards but my teammates could. However I did do quite well on the politics section despite being eight when Muldoon took office. It was great fun.

I turned the trophy, a Muldoon toby jug, into my personal drinking vessel for the night. It is truly a hideous thing, and I am going to proudly show it off before returning it 🙂

Was lots of good people at the function I enjoyed catching up with. My only regret is I spent so little time actually talking to the Wellingtonista crew myself – I really do love their blog.

Well done to Public Address, Wellingtonista and sponsors for a good night. 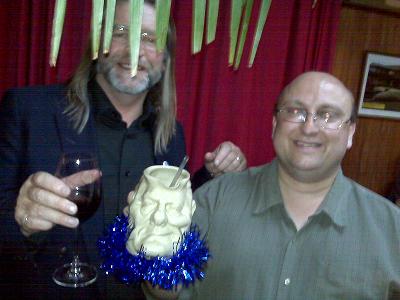 Graham and myself with the winning trophy.  It is almost scary!