Has been a very enjoyable three days in Dunedin.  Arrived Tuesday afternoon and checked in at the Leisure Lodge by the Botanical Gardens. I noticed a block away a new university hostel called Abbey College.  Hmmn, I though this looks to be the same area as Abbey Lodge used to be – and sure enough Abbey Lodge has become Abbey College.

Now this is very ironic, for me especially.  Because Abbey Lodge was my first major student politician activity.  In 1986 or 1987 Abbey Lodge, which is in Dunedin North, wanted to knock down an entire block of student flats so the hotel could expand.

So OUSA encouraged as many students as possible to file individual objections with Dunedin City Council.  Now this is not just signing a petition, but filling in a form specifying what you object to, and why.  And we were wildly successful.  Off memory we get several thousand objections and I actually personally got the most of any individual (several hundred).  This led to be being banned from Abbey Lodge and I even got kicked out of the well known irrasicable owner when I was there having dinner one day. Ironically many years later I almost dated a girl who turned out to be the owner’s daughter.  He would not have approved!

Anyway Tuesday evening we had an InternetNZ members consultation meeting with almost 20 people there which was great.  Some of us afterwards went to Etrusco, an Italian restaurant, for dinner.

We had around ten people dine there, and due to our number and the late hour were on a set menu. Normally I am not thrilled by this, but it all worked out very well. I was full after the salad and pizzas but then they brought out the pasta which was absolutely delicious. One of the better Italian restaurants I have been to. Despite it not being part of the set menu, we were all so keen to have gelatos, they threw them in for us at no extra costs. And my God they were huge – four large scoops. So overall great food and great service. Will return.

Wednesday was a sort of spare day for me so I worked from the hotel room in the morning and then popped into Katherine Rich’s office by the Octagon. It was (for almost all of the day) beautifully sunny so I had a great walk from the Octagon through the shopping areas, then through the university campus, and back to the botanical gardens.  In fact have been walking almost everywhere here and done around 25 kms over the three days. 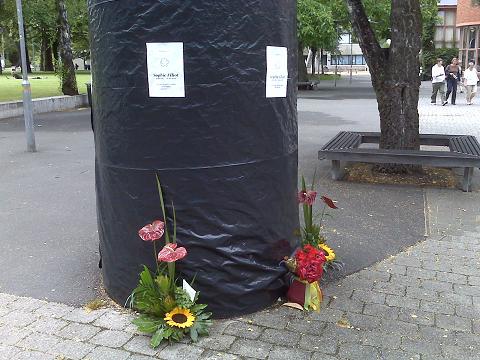 Outside the university union, they had a little memorial to Sophie Elliott which was quite moving with its simplicity.  The Elliott murder has affected me to an unusual degree.  I mean there are lots of murders around the place, and I did not know Elliott or even have a close friend who knew her well.  But the killing is something which I just keep thinking of.  It might just be that she sounded such a wonderful person (and I loved the suggestion she would or wanted to be the first female Reserve Bank Governor), but I think it is also the fact it happened in her own house, with her mother having to witness it.  There’s something about having violence in the sanctity of your own home which chills me.  Maybe also it is the fact it appears to be so coldly premeditated and the (alleged) killer planned and did it without even trying not to be caught.  Normally they kill you when you are alone and try to hide their involvement.  Anyway enough obsessing on that, but my thoughts constantly go out to her family and close friends.

In the evening I had some pleasant drinks with Bryce Edwards at the university staff club – my first time there.  Earlier in the afternoon had some drinks with Jordan Carter and other INZ folk at the famous Gardies pub.  Only time I have been in there and we were the only patrons!

Thursday has been at the NZNOG Conference at the Otago Museum.  It used to be managed by former OUSA legend Ross Blanch, but not sure what Ross is up to now-a-days.  Ross won the OUSA presidency by one vote – and on a recount after losing the day before by one vote.

The Thursday conference dinner was at the Captain Cook – my former “local”  – a spit roast in the garden bar.  Very pleasant and always fun to be at the Cook.

Today in the conference again.  Will pop out at lunchtime to buy some books from the University Bookshop and then flying back to Wellington.

I loved living in Dunedin, and always love visiting.  If there had been more jobs here I could well have stayed on after I left Otago University.  It’s a great place and I always encourage students to choose Otago to study at.