A reader sent me this photo of a sign he has erected on his property. 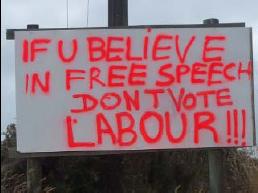 It is of course illegal. He says in his e-mail:

I don’t belong to a political party and never have

I am registered to vote and do vote. Therefore I should have the right to say and encourage others about any belief or thought that I may have without having to register the fact in an election year.