Last weeks Stats NZ released their latest monthly migration statistics, and the permanent and long-term departures for the last 12 months were up 11.9% from a year ago.

This issue is only getting bigger with the Fairfax page one stories on their poll results showing 10% of Kiwis are considering moving to Australia within the next 12 months.

The Standard is trying to do a King Canute and convince everyone there is not a problem, and you are all wrong. I think this is a classic example of why the Government has failed so badly in the last couple of years – it ignores the issues concerning average NZers and even worse lectures them on why they are wrong. Anyone who doesn’t live in a cocoon would know that the gap with Australia is a major concern, and that more and more families are getting divided up as people leave. Just talk to anyone not in politics as a day job, and they will bring it up as an issue.

But you do have to congratulate The Standard for the audacity of putting on the same graph axis the proportion of people staying and leaving, so they both look like flat lines.

They also keep pointing to net permanent and long-term migration, to claim there is no problem at all, but in doing so they confuse two semi-separate issues.

The level of inwards migration is effectively set by the Government. Yes there are factors such as NZers returning home (and that has also been dropping) but the Govt can and does adjust the requirements for migration with the points system, language requirements etc etc.

If the Govt wanted to, it could have 150,000 or even 200,000 migrants a year coming here. As a non third world country there is almost no limit to how many people would move here if they could.

As an example there is a big difference between say losing 40,000 people a year, and having 44,000 people migrate here and between losing say 200,000 people a year and having 204,000 people a year move here. There are also economic costs to losing people who have embedded in the local economy as opposed to having new workers from overseas. That is not an argument against immigration – I am a fan of it, but that simply replacing someone in NZ, with someone else is not the same as retaining them in the first place. A bit like an employer would rather keep staff longer than have say 30% staff turnover annually.

So while net PLT migration is a useful indicator for some things, it is one which can change dramatically by govt policy as there is near infinite demand from people to live here. And even if policy does not change, it is better to retain people than replace them.

So what has actually been happening with all the different stats. Let’s look at them one by one. First external migration: 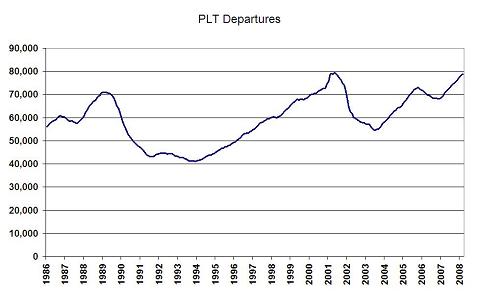 Departures from NZ declined in the early 1990s and stayed fairly flat until 1995. From 1995 until 2001 there was a steady increase. September 11 reversed that trend as NZ looked so safe and secure, and for two years it dropped away. But from July 2003 it started increasing again and has just about reached an all time high for a 12 month period – the record is 79,328 in the 12 months to May 2001. 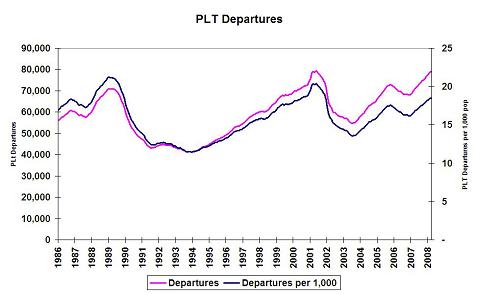 Now adjusting for population growth shows a slightly better picture, but the trend of the last few years is still marked.

Next let us look at PLT departures and arrivals for New Zealand citizens. As I mentioned above arrivials of non citizens is simply a function of how liberal or conservative your immigration policy is. But with NZ citizens it is appropriate to look at how many return home. So below are the numbers of NZ “nationals” who leave or arrive permanently or long-term. 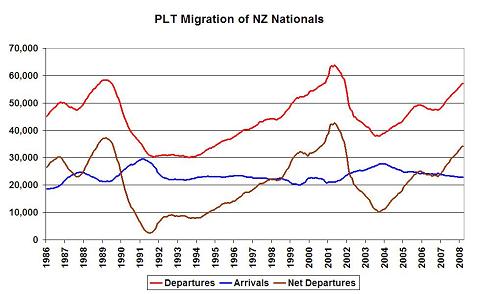 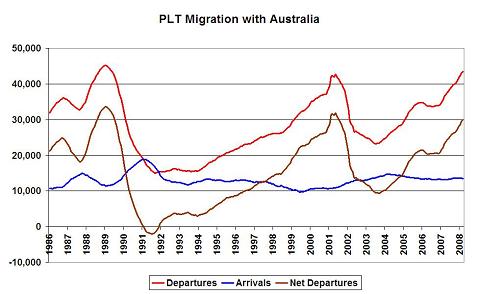 Finally we look at migration with Australia, as that is where so much of the focus is. The level of people coming from Australia to NZ has dropped a bit since 2003, and increased from 1999 to 2003.

The big mover has been people going from NZ to Australia. It has almost doubled in the last four years, and net migration has more than tripled.

Now you can say, like Labour and allies do, is there a problem? Hey we are only losing 20 people per thousand residents per year? Well look at the implications over a generation of say 30 years. Over one generation 60% of the population will have left NZ. And it looks like only one in three nationals would return. Now that is a massive degree of economic and social dislocation.

Is it all the fault of the Government of the day? No, of course not. But should the Government be exhibiting a determined focus to implement policies that will lift NZ’s overall national income, that will make people want to stay or at least return to NZ? Hell, yes. And have the current Government’s policies been working? Hell, no.