The level of tax cuts is in line with what I expected. If they were part of a continuing series of tax cuts over the last few years, they would probably meet expectations. But by having given nothing back (to the 80% who don’t have Working For Families) for eight years, people will find it really doesn’t even compensate for fiscal drag.

Dr Cullen has spent so much everywhere else that all he has been able to do is drop the 15% tax rate to 12.5%, and move the thresholds up by a few thousand a year.

The table below shows what we currently pay in tax, and what under this plan it will be from now until 2011. The percentage shown is the average tax rate on that income. 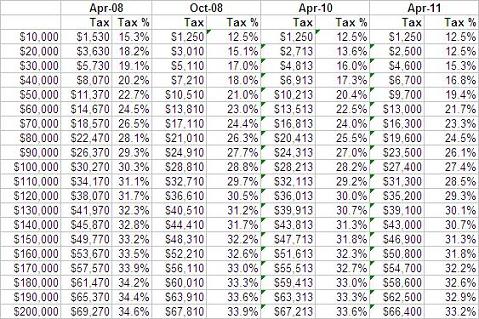 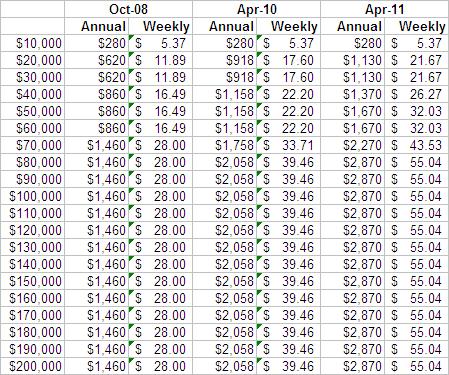 Now assume by 2011/12 the average wage will be $50,000 (I suspect it will be more than that). Even under these tax cuts the tax will be $9,700 which is 19.4%. In other words for someone on the average wage, this merely restores you to where you would be without bracket creep.

Now let us look at how we will compare to Australia 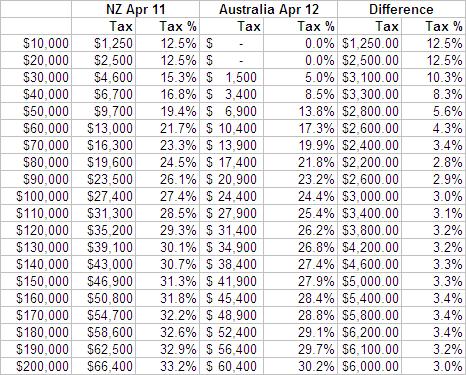 So it’s not a bad start. It is reasaonably well balanced, but it is still quite modest in comparison to Australia. Also the proportion of tax paid in the year to March 2009 by those rich pricks earning over $60,000 increases to 55%. Yes the top 15% pay 55% of the tax, and the bottom 15% pay 1%. Now of course the top earners will always pay more, but with wages higher and tax less in Australia, the incentives to move remain strong.

The real challenge is to deliver tax cuts which not only give people some more of their money back, but also are designed to boost economic growth. It is by boosting economic growth that one can really close the gap.