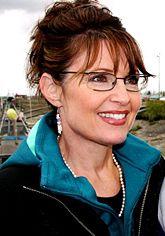 John McCain has made a great choice with Sarah Palin as his Vice-Presidential candidate. You could not get a more down to earth candidate, and she will help him significantly I think in appealing to working class voters – especially women.

She is Governor of Alaska and is their best traditions still hunts moose occasionally. She has also been a commerical fisherman.

She is very popular in Alaska where as she exposed severeal fellow Republicans for ethical breaches. She beat the incumbent Republican Governor for the nomination in 2006 and became Governor at 42. Her approval ratings have been over 90% in 2007 and as late as last month were 80% which is massive.

She is fairly moderate (for an Republican in Alaska!) on social issues. While against same sex marriage, she used her veto to over-turn a state law banning the state from giving benefits to same sex partners of state employees.

She has five children, including one son who has Down syndrome.

Palin won’t be a match for Biden on experience and policy details. But she will most definitely appeal to a lot of Americans as a politician they can relate to – who hasn’t got out of touch.