Fresh from Michael Cullen blaming John Key for the global financial crisis, Helen Clark is saying that 60 Kiwis would have died in Iraq if National had got into Government.

Good as always to see the PM focused on the future. But let us dissect her rather hysterical claims.

First of all Helen keeps forgetting to mention a rather important fact. Helen did send troops into Iraq. Sure she sent them in the post-invasion phase, but that is the phase where most have died, and which has lasted the longest.

Now some may claim that this is somehow different – they were just engineers that were technically troops. Well go look at the Wikipedia article on the Iraq war. 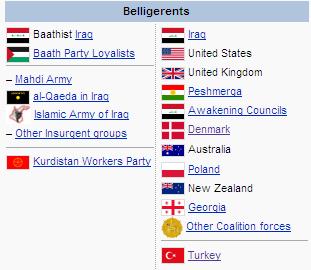 See that NZ flag there. Yes we are listed as a belligerent force. I repeat – Helen Clark sent troops to Iraq. Yes there was a UN mandate, but there has been a UN mandate for all the troops post invasion – up until the end of 2008.

The troops were kept there for a full 12 to 13 months – two entire rotations of six months.

Now Clark says that as there have been 4,000 US troops killed, if NZ had sent troops in (which we did) we would have had 60 pro-rata deaths.

Even the media are sceptical of this, noting that Australia has had no deaths (actually there have been two).

Now Clark’s pro-rata calculation is based on a premise that NZ would have had troops there the entire six years (and Clark had them there for one year herself) and they would have been doing operations as dangerous as the US military (which is ludicrous but we will come to that).

Helen Clark sent troops to Iraq in September 2003. So even if we extend to the end of August, there were only an additional 150 US causalities for a total of 289.

Now if we use Helen’s pro-rata calculation against 139 and 289 we get 0.5 and 1.1. So in fact the likely death toll of taking part in the invasion was maybe one casualty.

By comparison we have had four soliders killed in East Timor!

So the toll from taking part in the invasion of Iraq would pro-rata be 1/4 the death toll from being in East Timor.

Incidentally during the 13 months Helen Clark had troops in Iraq, there were 773 US deaths, which is 20% of the 4,000 total. The year they were there was one of the most dangerous!