It’s been a week of turmoil on some of the political markets as well as the sharemarkets. Mu weekly newsletter for iPredict went out today, where I try to anaylse the trends. It is repeated below: 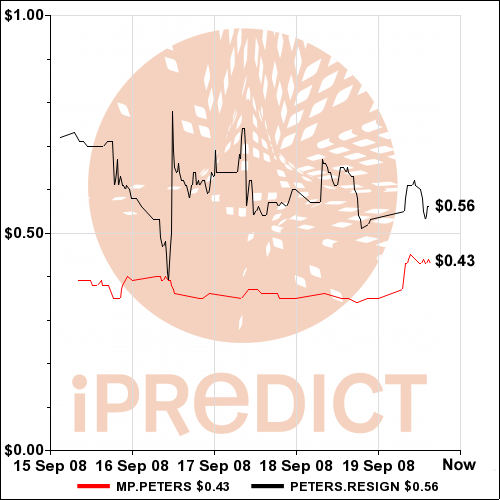 Peters.Resign had another volatile week. It started off fairly constant at 70% and stayed there until Brian Henry started testifying Tuesday morning to the Privileges Committee. The early testimony saw the stock price fall to 35% as some sellers bailed out. But then as it became clear that Mr Henry’s evidence was actually backing up Owen Glenn’s version of events, the price skyrocketed to around 80%. Some huge profits made there.

The price then declined over the rest of Tuesday and Wednesday to settle at around 55%. As news broke Thursday morning of the SFO having provided information to the Privileges Committee the stock went up to 65%, But then at 3 pm Thursday the existence of a letter from an anonymous SFO staffer to Ron Mark was revealed and the stock fell to around 50%.

A related stock MP.Peters (will he make it back to Parliament) was less vigorous but shared some trends with Peters.Resign. It started at 37% and the day before the final open Privileges Committee hearing was at 35%. As the media reported NZ First insiders saying Henry would have evidence to clear Peters, the stock went up to 41%. But then the actual evidence pushed it down to under 35% and the SFO revelations pushed it further down to 33%. But a Roy Morgan poll published Thursday evening showing NZ First on 5% saw the stock rebound to 37%. 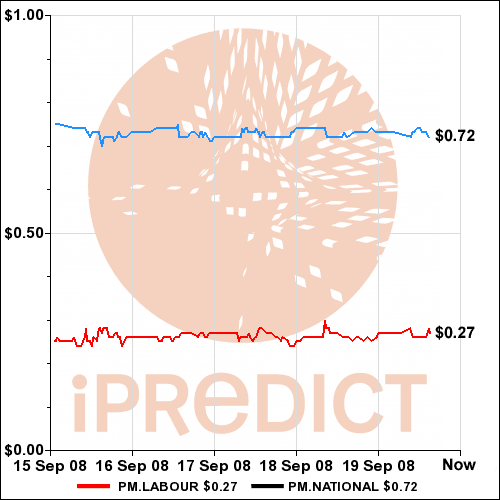 PM.Labour has spiked up and down between 24% and 30% this week. The 30% peak happened as Clark was reported saying a National Government would have resulted in 60 dead Kiwi soldiers n Iraq. However this peak lasted just a few minutes and by the evening they were down to 24%.

PM.National has had less trading, varying between 70% and 76%. The Pm’s announcement of the election date last Friday pushed them down from 73% to 71% but the weekend saw a continual increase to 76%. Cullen’s attack on Key’s career at Merrill Lynch saw the stock drop from 75% to 71%. The stock recovered to 74% but then got pushed down again with Clark’s Iraq claims, but only to 72%. National’s doctor retention policy may have had a moderate effect pushing National up from 72% to 74%.