The NZ Herald reports on how Labour authorised and may have to include the cost of two CTU ads which promote Labour and attack National.

Labour, and Labour candidates, should be very careful about accounting for union activity on their behalf. Such as this one below: 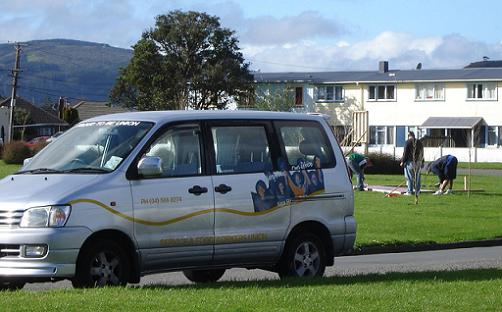 Here we have a Service and Food Workers Union car (and presumably staff) helping erect Labour Party hoardings in Rimutaka.

Gooner at No Minister has a similar story, sighting an EPMU vehicle being used in hoardings in Northcote.

Labour seem so short of volunteers that they can only get their hoardings up with union staff and vehicles.

Will the unions declare the cost of their vehicles and staff as a donation to Labour? Will Labour include the costs of said staff and vehicles in their expense declarations?

If union staff were doing this in their own time as volunteers, there would be no question of this being an expense. But by using union cars, and doing it during work time, I think there is a reasonable case that it becomes corporate assistance and a market rate should be calculated for what the car and manpower would cost.

Keep the photos flowing and mark down locations, dates and times. They may become evidence!