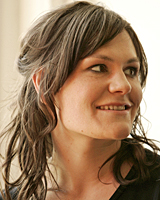 The Herald on Sunday interviews Katya Paquin, partner of Green co-leader Russel Norman, as she battles a brain tumour, first diagnosed in 2005. It is hard to imagine how challenging coping with that must be, and one can only hope that upcoming surgery is as sucessful as it can be.

Paquin heads up the Green’s advisory unit, and has a law degree and honours in politics.

Her sister Anna Paquin, is of course the famous actress. A new series in the US called True Blood has Anna in the lead role as Sookie Stackhouse and I’ve watched the first couple of episodes. You almost do not recognise Paquin at first as she has long blond hair, and has that Southern US accent down so well. It’s a great TV show, which will get a cult following I predict.

Apart from the personal stuff on Paquin, there are some interesting political points in the interview:

The couple’s combined dedication to the cause goes back to their first meeting at work. Their common aim now, apart from conquering Paquin’s tumour, is to help the Greens get across the 5 per cent vote threshold at the general election.

This is the major challenge for the Greens – to stay in Parliament. As I have said previously I think a different strategy could have them close to 10%, but the polls have them perilously close to 5%.

It’s a campaign that will be run very differently this time around, they say, a campaign which will be strictly independent from Labour. There will be no “Jeanette and Helen limo” shots after Labour’s deal with New Zealand First in 2005.

“I felt she [Clark] sold us down the river,” says Norman. “I think it was a bit of a shock to the party, to all of us.

And if NZ First makes it back, Clark will choose them over the Greens again. Could anyone imagine Helen Clark spending so much political capital on defending Jeanette Fitzsimons or Norman himself?

Based on the polls Labour is “clearly” in trouble and “those polls have been pretty consistent”.

With the Greens now wary of Labour, Norman says they would consider working with National.

“It depends on policy. If we could have an agreement on a public transport system for Auckland, reduce our greenhouse emissions – for us it’s about policy gains so we will work on that basis with whoever, that’s what it’s got to be about.”

I don’t think there is any question that the Greens, if in Parliament, would always vote to have a Labour-led Government over a National-led Government if they are in a position to decide. This is of course why Labour takes them for granted.

However if National can govern without the Greens, but is still willing to negotiate a policy agreement with them in exchange for perhaps an abstention on confidence and supply, then it would be worthwhile to at least try and form an agreement. It might in the end prove impossible, but it would be nice to be able to say “We agree in these areas and will work together”.