One of the nasty clauses of the Electoral Finance Act is it requires home or residential addresses to be used in all authorisatiion statements. There may be some merit in this for material put out by individuals, but for parties and organisations their registered office is all that should be needed – as was the case in the past. 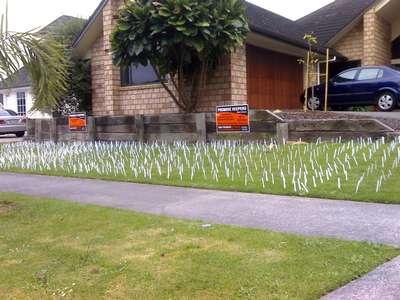 Over the weekend four women stuck 1,000 (plastic( knives into the Bob McCoskrie’s lawn. They also placed an (ironically) anonymous note on his front door.

This is thuggish intimidatory behaviour. I have condemned mens rights groups for their antics outside the homes of Judges and lawyers, and this is even worse. It is clearly designed to intimidate.

It is possible the people responsible could have found Bob’s address even if he was not forced to have it on election material for Family First. But that is not the point – there is a difference between being in the White Pages and having to have your home address plastered on pamphlets, websites and billboards. I know of several women who have refused to be financial agents because they don’t want their home address published so widely.

Just another reason to vote for parties that will repeal the Electoral Finance Act.