Readers might enjoy this podcast of Auckland Central candidate Nikki Kaye on The Edge this week.  It’s quite hilarious I thought – typical Edge irreverence. 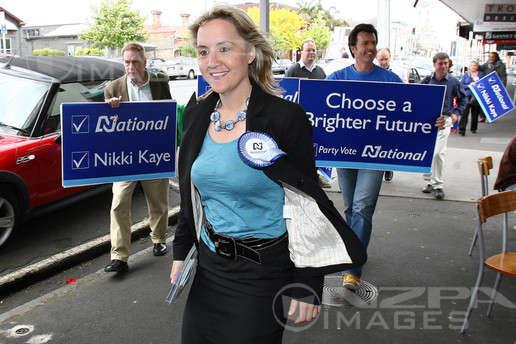 Also NZPA have just done a piece on Nikki out on the campaign trail:

The 28-year-old lawyer strides down the streets of central Auckland and up into Ponsonby trying to eat into Labour MP Judith Tizard’s majority of around 3500 on redrawn boundaries….

Ms Kaye has been doing it the old-fashioned way — knocking on doors and walking the streets.

It is a difficult electorate to target.

It has a high proportion of under 30-year-olds making up many of the more than 21,000 apartment dwellers in the city.

Many of them are not natural National voters, but they are courteous to the wanna-be MP and many say to her face they will be voting for her.

One Maori woman says “give me balloon and you’ll get my vote”… Ms Kaye gladly hands over the National blue balloon.

“Look even if you don’t vote for me and I do get elected, here’s my card if you ever need any help,” Ms Kaye said.

She cuts a confident figure, similar in size, style and politics to the retiring National front bencher Katherine Rich.

Her supporters say they have hardly seen the Labour machine on the ground.

For both candidates it could be a political struggle to the death, as they are both unlikely to get in on the list on current polling.

Ms Kaye grabs another voter by the hand, thanks her for her vote and moves on … trying to power walk her into Parliament.

I think a lot will come down to how Greens supporters vote. They will give the Greens their party votes. They then have to choose whether to put Judith back in, or an socially liberally environmentally friendly National MP who will be a voice within Government, or to vote Greens with both ticks.

UPDATE: Toad (who is a senior official of the Greens) has made the following comment in the thread below:

I’m not an Auckland Central voter any more (I was until about 18 moths ago), and as almost everyone here knows, I am a Green activist.

Judith Tizard is the biggest waste of space imaginable. I’ve lived in that electorate for most of my life, and the only decent MP it ever elected in that time was Sandra Lee. Before that we had Prebble! Enough said (before I say something defamatory).

I think Green voters should vote Green with both ticks in that electorate. If that means Nikki Kaye gets elected, then I could live with it. Tizard should have been pensioned off.

But why did the Nats rank Nikki Kaye as low as 57 on their list? If she were a bit higher, she would have been guaranteed election on the list anyway, and Nat supporters could then vote for the Greens’ Denise Roche in the electorate. Together we could have consigned the Minister of Wine and Cheese (and Wine, and Wine) to political oblivion.

This is something the Nats and the Greens could have worked on. Pity we missed the opportunity.