Curia has just published its final monthly newsletter summarising the public polls, before the US and NZ elections. Normally we only distribute this by e-mail but I am sticking it up on the blog for download as a pdf, for interested persons, this time only: public-polls-october-2008 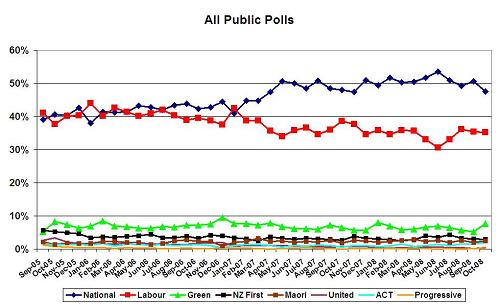 National has dipped down to below 50%, Labour has stayed fairly static and the Greens have had a significant increase. The interesting thing is the average of the polls is almost identical if one simly averages them all, or if you weight them by size and date. 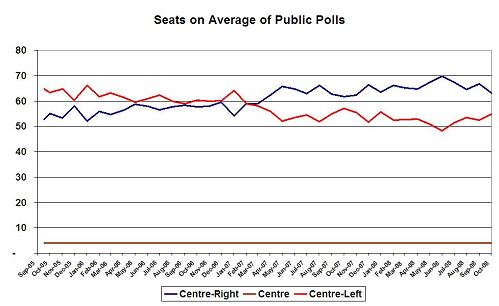 This is the more important graph and it does show how close it is. A Government will need 62 or maybe even 63 seats to govern. National/ACT/United Future just make it. Labour/Progressive/Greens can’t govern even if the Maori Party support them. However a change of just a couple of percent means they could.

Also from the front page of the newsletter:

The average of the public polls has National 12% ahead of Labour and by the narrowest of margins able to form a Government with ACT and United Future. The gap last month was 15% so the average lead slightly narrowed in October.

In the United States Barack Obama has a 6% lead in the popular vote and a projected huge 168 vote margin in the Electoral College. Only 10% of Americans say the country is heading in the right direction, which gives some idea of why the tide is not favouring incumbents. The polls also show the Democrats gaining eight Senate seats (to 59), 15 House seats and one Governorship.

The UK Labour Party is 12% behind the Conservatives who are projected to have a 70 seat majority on these results. The gap has narrowed thanks to Gordon Brown’s handing of the financial crisis.

In Canada we compare the election results to the average of the public polls and the seat predictions. The polls came out of it looking pretty good.

We also carry details of polls in NZ. There are polls in the seven Maori seats, plus Nelson, West Coast-Tasman, Palmerston North and Tauranga. Also issue polls on economic management, coalitions, organic food, beach nudity plus the usual business and consumer confidence.

This newsletter is normally only available by e-mail. If you would like to receive future issues, please go to http://listserver.actrix.co.nz/cgi-bin/mailman/listinfo/polling-newsletter to subscribe yourself.

If you want to receive future issues just use the link above.