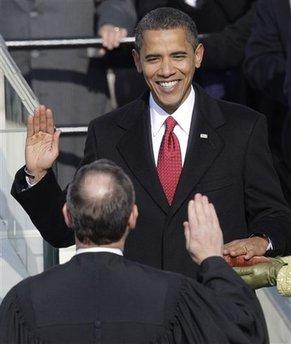 Today was a special day in the history of the world. Regardless of whether or not one supported or preferred the Republican or the Democrat candidate, the fact is Barack Obama won a very healthy victory in the election to be the 44th President of the United States.

When Barack Obama was born in 1961, the marriage of his black father and white mother would have been illegal in half the United States, and blacks across the South were virtually barred from voting.

The United States is a great country, and it is great not because it is perfect, but because in just a few decades it can go from the stains of segregation (and slavery before that) to electing an African-American to the most powerful job in the country, and the world.

And the stench of slavery is not ancient history, but only a few generations away:

In 1989, Douglas Wilder, the grandson of a slave, became the first African-American to win an election for governor. The Democrat did it in Virginia, a former slave-owning state. Wilder ran for president in 1992, but quickly bowed out.

There will be plenty of days to disagree with the policies of President Obama, to complain about the media hype. But for me today is not one of them. Today is a day to celebrate a peaceful transition of office in the most powerful country on Earth, and to celebrate Obama’s achievement in becoming the first African-American President.

His inauguration speech is here.

In a few days the celebrations will end, and I have no doubt the mettle of Obama will be tested both in domestic and foreign policy. It will be interesting to observe how he responds to the many challenges of the job.