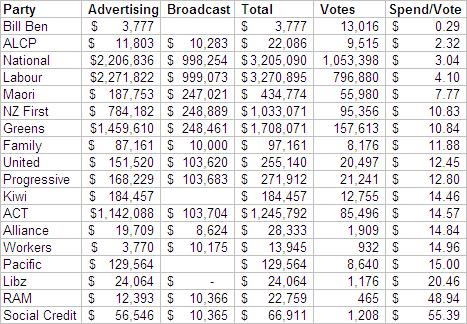 The variation is huge – from 29c a vote to $55 a vote. Take the two extreme minor parties. The Bill and Ben Party got 13,016 votes with under $4,000 of spending. While Social Credit got one tenth as many votes despite spending 20 times as much money.

Most focus will be on the parties that do make it into Parliament, or have a serious chance of doing so. Of those National spent the least per vote – $3.04. So hardly buying your way to power.  ACT spent the most at $14.57 a vote, followed by Progressive at $12.80 a vote.

The Greens and NZ First both spent over $10 a vote, two to three times that of Labour and National.

Money is useful in politics. But it is far from a dominant factor. Policies, leadership, media reporting, volunteer effort, membership levels, smart use of IT, MPs behaviour all have (in my opinion) a greater influence on electoral outcomes than merely money spent.