Most readers will be up with the latest in UK politics, but for those who are not, let me tell the story from the beginning.

The centre-right (like in many countries) has had stronger voices in the UK blogosphere. The two most popular blogs are run by Iain Dale and Guido Fawkes (Paul Staines).

Dale is a former Conservative candidate and staffer. Also a successful politics niche publisher who through his blog has become a very influential commentator – both online, and in the traditional media. He also happens to be gay, making it very hard for Labour to stereotype him as a typical consservative Tory.

Paul Staines is not a member of any party. He is basically a wealthy libertarian and while he is from the centre right, he has attacked many Conservative figures also including David Cameron and the Party Chairwoman over her expenses. Staines does a lot of investigative journalism and has been responsible for a couple of very senior resignations from within the Government.

None of the left wing blogs caught on to the same degree, so UK Labour set up LabourList and got Derek Draper to run it. Draper is a former Labour activist and lobbyist who swapped careers to become a psychotherapist after it was revealed he boasted to clients that he had so much influence he could get tax breaks for clients.

The LabourList website is nominally independent but has rarely criticise the Government, and has launched personal attacks on Dale and Staines, calling them racist (because Dale defended Carol Thatcher’s golliwog comment).

Then we have the revelations this week, that Draper was working with a senior advisor to PM Gordon Brown to set up another website – Red Rag – and this one would be full of smears about Conservative Party MPs. The advisor, Damian McBride, is very senior – Brown’s former personal press secretary and now Head of Strategy. He has resigned. 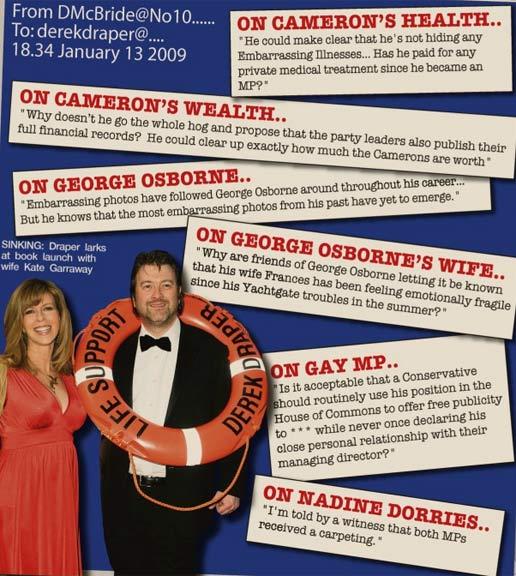 The News of the World has full coverage of the attempted smears.Also good coverage in The Times.

They even taught about how to “sequence” the stories for maximum impact, using timing and technology, and including links to suggestive photographs.

Huge congrats go to Guido, who got hold of the e-mails and exposed all this. He has an amazing track record in exposing wrong doing. It shows how desperate people get to retain power.

It also shows how relatively tame things are back in NZ. The worst “invented gossip” we had to endure was the fantasy smear over John Key “buying” his Helensville seat in exchange for donations totalling $1.5 million. I have always wondered whose idea that smear was.