Myself and Auckland Girl got to see the opening night at Downstage of Jo Randerson‘s “Good Night – The End” play, as I got two tickets for review purposes.

It was a quirky little play, based on the interactions between three Grim Reapers during their off duty time between shifts.

The first thing I noticed was the wonderful set, with the stage as a 1970s style house with garish colours, and skulls wallpaper. And the opening is nice and dramatic with one of the grim reapers appearing suddenly and pronouncing doom in a mega-amplified voice. 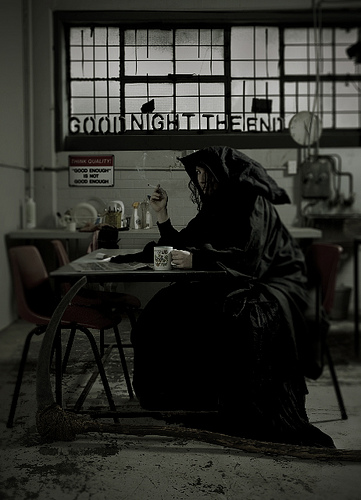 The play is essentially about the interactions between the three Grim Reapers, with some comic interludes with their Italian supervisor.

There isn’t a lot of a plot to the play (there is some, which I won’t give away) – it is very much based on the character interactions. It struck me at times as a cross between Seinfeld and Kath & Kim. Lots of random, funny conversations that don’t lead anyway, but are still amusing.

Randerson herself plays the grumpy uptight Harvester of Sorrow. You also have the slightly dim and overweight Unavoidable Destiny and the geeky (and male) Transitional Friend. They abuse each other, play pranks on each other, and live a very mundane life for Grim Reapers. Randerson’s character is also dodging the affections of her Italian boss.

Overall it was an amusing evening. I thought the play did go on a bit too long though, especially as it was hard to tell if one was getting near the end. A few patrons actually ducked out before it ended. A pity for them, as the last couple of minutes of the play were wonderful, and worth waiting for.

The best parts for me was the finale, the set, the basic concept of three grim reapers in their spare time and the ability of the actors who played their characters so well. I did however find the script a bit lacking, but that might just be my fairly literal approach to drama where I like clear beginnings, middles and ends.

The play continues on at Downstage until the 3rd of October and started on the 11th of September. It was an enjoyable way to celebrate my birthday.