If they could bottle what John Key’s got and sell it, National would make a killing.

It might be a seemingly innocuous brew of good humour and affability, rather than the traditionally more coveted mix of charisma and skilled oratory, but it clearly works.

I’m going to return back to what Tracy wrote, but want to cut over to another story that I think is a superb example of what Tracy is on about. It is this one about firefighters protesting outside the opening of a new fire station by the Prime Minister, over their pay claim.

Now this is the sort of issue that would normally prompt a discussion in the PMs Office and the PM. You will be worried about the negative message getting in the way of the positive message about funding a new fire station.

Now I can say with some certainty that the way previous National PMs would have handled the situation is to have the Minister of Internal Affairs do a press release and briefing the day before the briefing setting out how the Firefighters Union is misleading over their pay claims, and that with their various allowance they rake in $70,000 and spend so much of their time sleeping on standby, most can easily do a second job, and that their total pay per hour actually spent working is well over $50 an hour. This would then put the pressure on the union and protesters to respond, and take the heat off the PM.

Again with some confidence I can say former Labour PMs would handle it very similarly. The key difference would be that they wouldn’t have the Internal Affairs Minister release the information publicly, as they don’t like to be seen crapping on the unions that fund them. Instead a press secretary would give the relevant information to a journalist, and they would rely on the rest of the media picking up the story.

So what did John Key do:

The firefighters, in their yellow protective clothing, waved placards, chanted and pressed themselves against the station’s glass roller doors as Mr Key spoke.

After the opening, he went outside and addressed them through a megaphone.

He insisted he had not yet received a recommendation on wage rises from the Fire Service.

“All we’re saying to you guys is we’re living in a backdrop where a hell of a lot of people are losing their job, where the Government is running big deficits and where we’ve all got to be reasonable.”

Mr Key said that if insurance levies, which pay the Fire Service’s wages, went up then more pressure would be placed on taxpayers, already struggling with the recession.

“At the end of the day what we’re trying to do is make sure there isn’t huge pressure on a lot of people that are losing their jobs,” he said. 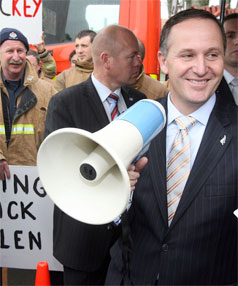 However, Mr Raines added: “It was good to see that he actually had the balls to come out and actually front up to the crowd.”

And quite a few of the protesters would have said the same thing. Don’t get me wrong – they are not going to suddenly convert to National because of what Key did. But they will say, “Hey at least he did us the decency of listening to us, and talking to us- rather than just attack us”.

And this is what is a strength of Key’s. He comes across as so reasonable. Apart from some of the authors of The Standard (and some of the commenters on this blog!), most people can see that and respond to that. They think he’s a nice talented guy, who tries to reasonably engage with everyone – even those who are there to protest against him.

So back to what Tracy said:

This is what has Labour strategists scratching their heads. As the party heads into its annual conference in Rotorua this weekend, it faces the same dilemma National once faced: when your opponent’s most potent weapon is its leader, is an old-fashioned contest of ideas going to be enough?

Maybe it’s that “what you see is what you get” quality to Mr Key’s leadership that strikes a chord with voters. It is hard to find artifice in a man who makes verbal gaffes, has a nice line in self-deprecating humour, talks about his kids a lot and has never worried too much about looking statesmanlike.

Again, one could imagine it easy to have someone advising the PM that whatever you do don’t pick up a megaphone and talk to the protesters. The arguments would be that it is undignified, it puts you on their level, it might look bad on the news etc etc. But he doesn’t worry about that very much.

Politicians have never underestimated the power of a friendly smile and an open and engaging face. Helen Clark crawled out from under the ignominy of dismal poll ratings as Opposition leader by smiling more and softening her voice under the tutelage of Brian Edwards and Judy Callingham. The remarkable thing is that she even had to be taught; in a more relaxed setting, Miss Clark loves nothing more than a good laugh, and does so boisterously and often. But she almost had to unlearn years of political training to unlock the person within and even then never managed to drop the shield completely.

Of course, spin doctoring can only go so far and, in the wrong hands, a politician’s smile can be an unmitigated disaster. Take British Prime Minister Gordon Brown. He cemented his unpopularity only after an attempt to connect with voters by smiling scarily and at random through an infamous YouTube clip.

Simon Hoggart, in The Guardian, likened it to “the smile a 50-year-old man might use on the parents of the 23-year-old woman he is dating, in a doomed attempt to reassure them”. Even Mr Brown’s own colleagues could not hold back from poking fun at him.

Ha that is a great analogy.