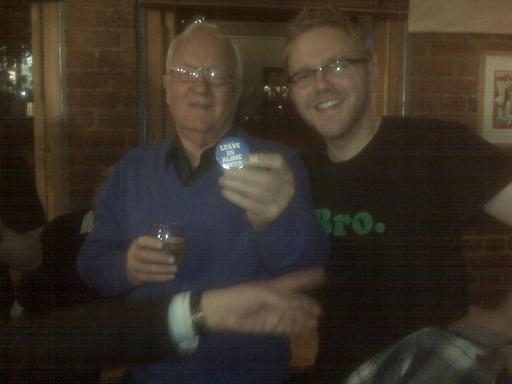 A snap of Sir Roger with Salient Editor Jackson Wood, showing off one of the badges funded out of compulsory student association fees that say “Leave us alone Roger”.

The irony is that it is fact the compulsory student associations that won’t leave students alone. And that they spend their compulsory funds on stupid badges.

I doubt anyone actually believes the press releases from various student unions, but just in case. First of all OPSA:

ACT’s bill differs from previous attempts at voluntary membership. It will not only force voluntary membership on all campuses irrespective; but it is essentially the same as the “full-blown” type tried in recently in Australia, where institutions are not allowed to charge a compulsory services levy and use this to buy services from students’ associations.

The bill is in fact very much in line with the three previous bills in the 1990s. They all allowed individual students to decide whether or not to join. The current law was a last minute compromise by NZ First.

The issue of service levies has arisen, because it has become de facto compulsory membership in some areas with an institution funding an association through this back door.

“The National government have expressed previously that they would like better outcomes for Māori in education. TMA questions how this view is possible if they take the reliable tools we have, this being our voice and the right to express our autonomy” said Poutu

The Albany Students’ Association, a not-for-profit incorporated society that currently serves over 7,000 Massey University Albany campus students, relies heavily on student membership levies and, without them, would be economically crippled. “Contrary to what the ACT Party is suggesting, students are able to opt out of membership if they do not want to be a part of their students’ association, but most of them appreciate and support the fact that we provide student-focused services such as Orientation; student publications, independent advocacy advisors, and welfare services.

They contradict themselves in the same paragraph. They claim with compulsion they would be crippled, yet also claim students can opt out and the fact most don’t is because they do such a good job.

NZUSA do the same:

“Independent representation, advocacy and support, sporting and cultural clubs and social events such as Orientation would all be under threat in the unlikely event that this Bill succeeds, and all in the name of choice – which already exists!” said Blair.  …

New Zealand would do well to heed the lessons from the disaster that recently unfolded in Australia, which saw associations collapse nationwide under a voluntary system, …

I think the SAs must think MPs are morons. They keep claiming there already is choice, yet also claim that voluntary membership will see associations collapse.

What they really mean is that students have choice, in the Cuban sense of choice. A Claytons choice.

NZUSA vows to fight to keep students in the driving seat and interfering politicians out, and to win the battle to protect universal membership and retain quality advocacy and representation for New Zealand students. They deserve nothing less.

Oh really NZUSA should feature in a George Orwell novel. Their fight to stop students being able to decide whether or not to join a student assocaition they label as fighting to keep students in the driving seat.

It sounds like apartheid era South Africa’s defence of the “homelands” on the basis of keeping Black South Africans in the driving seat.

And then they use the Orwellian term universal membership and call it something to be protected. This is like calling armed forces conscription “universal service” and pledging to fight for the right fo young people to be conscripted!

Finally they push the myth they represent New Zealand students. They do not. No one body can represent NZ students. Students have diverse views on issues, and students should be able to decide to fund the views they agree with.

The CTU also joins the fray. Yes the Council of Trade Unions. Their members lost the right to have compulsory membership in the 1980s but they battle for student unions to remain the last hold out

“Student associations provide critical services such as student loan advice, welfare support, advocacy services, sporting and cultural clubs and facilities that are all essential for student welfare,” she said.

“The loss of these services would be incalculable.”

What a load of nonsense. Student Loan advice?? VUWSA (for example) couldn’t even balance its own budget for most of the decade. Their history of financial mismanagement would make them as suitable to be student loan advisors, as it would be Charlie Sheen to give monogamy advice.

Advocacy services, means advocating for Labour and the Greens – not an essential service. Students should get to choose their advocates.

And is the CTU really claiming that sporting and cultural club are “essential” for student welfare? Oh my God what would we do without the chess club.

Of course that also assumes these clubs would disappear under VSM. They won’t. They just won’t get grants to subsidise (generally) their travel. But the vast majority of clubs will carry on – with students deciding to join and participate in them – as they do now.