As a blogger I get invites to a number of media events, ranging from a new printer range (yawn) to the launch of a new alcoholic drink, which is far more fun. 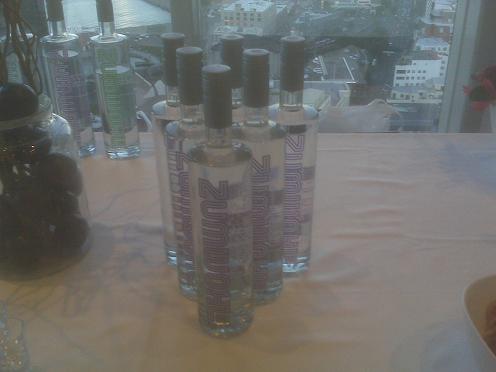 On Wednesday Zumwohl had a briefing and tasting of their three Zumwohl spirits. It was on the top floor of the Majestic Centre, which was a nice backdrop for it.

The name Zumwohl, is German and is a traditional cheers type toast. Ulf Führer is a German born Kiwi who created the drink.

At first glance I thought Zumwohl might be a type of vodka, due to its clear nature. But it is considerably smoother than Vodka, being based on a German shot drink.

They have it in three flavours – natural, plum and feijoa. The natural was very drinkable, even without a mixer – considerably smoother than vodka.

We next tried the plum. The nose on it alone is quite superb, and the taste is very refined. The feijoa was similar. My favourite of the three was the plum, while Alexandra (a visitor from the UK who I dragged along to it) preferred the feijoa.

How good is it? Well I’m going to Liquor King this weekend to buy a couple of bottles.

I’ve been drinking vodka since I was 12 years old (yes explains a lot) and while I wouldn’t quite go so far as to say I’ll be giving up vodka for Zumwohl, it certainly will be my preference when I have a choice between them.

I’ve yet to put it to the ultimate test – how well it mixes with L&P, but it is surprisingly very drinkable straight. Possibly too drinkable as you tend to drink faster than entirely wise when it is very nice.

A few bars around Wellington are launching the drink this weekend. It is also available in Auckland, and a few bars elsewhere.  For my 2c, it is well worth trying if you are a spirits fan.