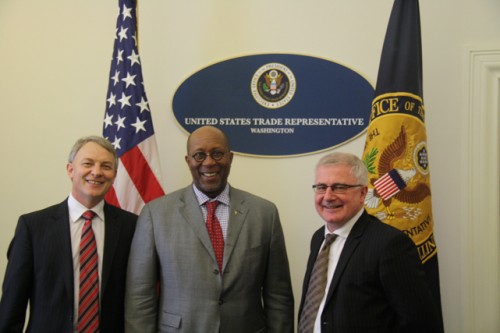 A photo of US Trade Representative Ron Kirk, with Goff and Groser, taken from Kirk’s blog. Fran O’Sullivan writes:

Kirk would have been left in no doubt after his meeting with the two men over the common commitment the major New Zealand political parties have towards advancing the cause of trade liberalisation in two pivotal areas: completing the World Trade Organisation’s Doha Round, and getting some traction on the proposed Trans-Pacific Partnership (TPP) free trade agreement involving the United States, Australia, New Zealand, Singapore, Vietnam, Brunei, Peru and Chile. …

But Groser, who has met Kirk six or seven times in the past few months, noted that while patience is the name of the game for those wanting to negotiate with the US, it was important that National and Labour demonstrated a united front on trade.

His invitation to Goff to join him at the meeting with the Trade Representative showed all the skills of his pre-politics background as a seasoned trade negotiator.

While neither politician would put it this directly, at least not in public, the political utility from a New Zealand perspective in presenting a united front means the US will not be tempted to play one major party off against the other when it comes to negotiating any bilateral tradeoffs within the prospective TPP.

Always good to see bipartisanship in the trade area. Both major parties have supported the free trade agenda since 1984, and long may it continue.