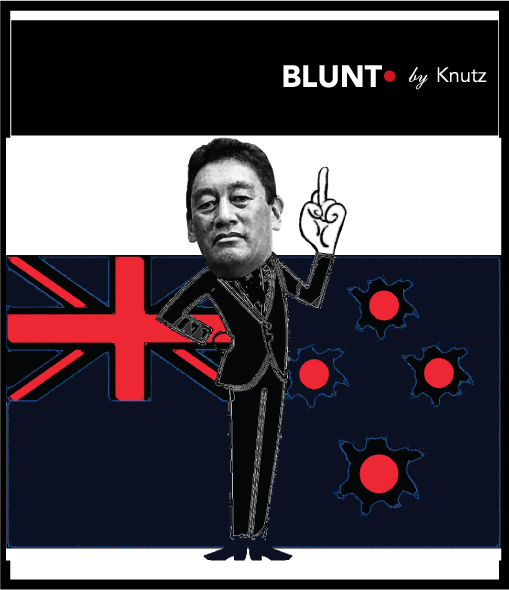 Blunt has a topical cartoon.

He said he apologised for the use of words that he used in the email when he asked Buddy Mikaere if he was buying into “that white man bulls****” and added that “white motherf***ers have been raping our lands and ripping us off for centuries”.

But Mr Harawira said he was talking about “European settlers” who have been responsible for 63 million acres of Maori land being lost in the past 150 years. …

Mr Harawira expressed anger at Labour leader Phil Goff, who has said Mr Harawira should be suspended for his use of language.

“The cheek of the bastard,” Mr Harawira said.

He said Mr Goff and his party had passed the Foreshore and Seabed Act.

“If I should be suspended for my language, he and his mates should be lined up against the wall and shot,” Mr Harawira said.

I think Hone doesn’t realise the impact his statements can have on people.  An MP using violent language, even metaphorically, can be alarming. Especially combined with his earlier e-mails.

Mr Harawira said his wife questioned him about his choice of language.

“The mofo word is demeaning to women and I apologise unconditionally for that word,” Mr Harawira said.

His statement is here. An extract:

I note also that my comments have been misunderstood as an attack against all Pakeha and that’s caused a lot of damage to my own credibility throughout the Te Tai Tokerau and throughout Aotearoa as well.

I need to say a few words just on that score. Over the past 25 years in particular I’ve put a lot of effort into what I call phase two of Maori activism. Phase one is protest action and I return often to that philosophy, it helped guide my thinking.

Phase two is building alternatives and since returning to Kaitaia I’ve put a lot of energy into helping Maori believe that we can do anything. (He listed local organisations and trusts)

Much of that work has meant building close working relationships with many Pakeha businesses in the Far North and throughout Te Tai Tokerau and many Pakeha people that I have worked alongside on a wide range of issues in the public arena right throughout the country.