As I did last year. I conducted a survey of MPs on the press gallery. This year I extended it to press secretaries also, and am very pleased with the 70 responses I got. Many thanks to those who responded.

The first initial data is below. This is the raw data. I will also blog next week results for each party (National, Labour, other) and a weighted average to take account of more National MPs than Labour MPs responding.

Respondents were asked to anonymously rate each media organisation and full-time gallery journalist from 0 to 10. The results for journos will be next week also.

I want to stress that this is not an impartial poll on the gallery. It is a poll of the subjects of the articles the gallery write about. Hence a low rating may indicate a media outlet or journalist has written very good stories that happen to damage that party or MP, and a high rating may indicate they are seen as a soft touch.

There are also some differences by medium, Print media will always tend to rate higher (in my opinion) than TV as they have a greater ability to cover more details in a story.

So basically I am saying don’t regard these ratings as some neutral indicator of who is good or bad. Those judgements can be left to individuals. Also do not assume these ratings are my personal opinions. They certainly are not. 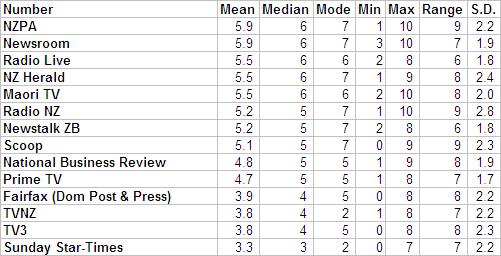 The mean is pretty self-evident, and they are ranked in order of highest to lowest. I am not surprised NZPA and Newsroom rate at the top, as they both concentrate more on information, rather than analysis. They are not into selling copies of papers – but into supplying information.

It is interesting that Maori TV rates so highly.

The median is the mid point value. Normally close to the mean.

The mode is the most common score given for that outlet.

The minimum and maximum and range (difference between the two) show how diverse the opinion is petty much every outlet. There is no group-think. Most outlets had some MPs give very low scores and some very high scores.