A lot of the debate at the moment is on the 38% tax rate. Now this rate was introduced in 2000 by Michael Cullen and has led to huge tax avoidance. Few on the right dispute that the 38% rate should go, or at the very least thre threshold for it increase massively.

But I want to focus also on the 33% rate. You see only should people not be paying a 38% rate, most FT workers shouldn’t even be paying the 33% rate. I’ve done a graph to make my point. 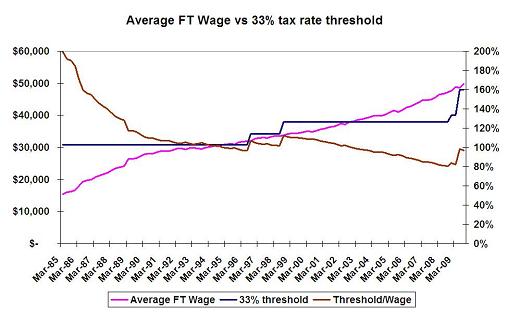 Now since then, the average wage has increased greatly, but the threshold has only been lifted four times. The end result is that where once you had to earn twice the average wage to pay the 33% rate, under Labour it go to the point where someone earning 80% of the average wage would be paying the 33% marginal rate.

So National has managed to get it back to around the level of the average wage. But it used to be at twice the level. So remember that if National does drop the top tax rate to 33c, so someone earning $100,000 has a top marginal rate of 33% – that back in 1986 someone earning the equivalent of $100,000 (being double the average wage) wouldn’t even be paying the 33% rate of tax.