The CEO of ALAC writes in the Herald:

The Ministry of Transport’s Safer Journeys strategy includes a proposal to lower the legal adult blood-alcohol content for driving from 0.08 (80mg alcohol/100ml of blood) to 0.05mg.

In its response to the strategy, the Government approved a number of measures including a zero alcohol tolerance for drivers under 20. It has, however, deferred a decision on the adult level to later this month. It will also consider the option of undertaking more research into the risk posed by drivers with a blood-alcohol content between 0.05 and 0.08.

In my view, the time for more research is past. It is time for action. The evidence for a lower blood-alcohol content is overwhelming.

I disagree. I think the evidence is far from overwhelming. I think a sensible Government would indeed do more research.

As an alternative to lowering the adult drink-drive limit, we could do more research on the level of risk presented by drivers with a BAC of between 0.05 and 0.08.

To do this we could replicate, using New Zealand drivers, the overseas studies that look at the impairment effects of alcohol at different levels of BAC while driving.

We could also investigate whether we could better establish the level of crashes that are caused by drivers with a BAC between 0.05 and 0.08. This could involve requiring all drivers involved in crashes to be subject to a compulsory breath or blood test.

I think both those research ideas are laudable. ALAC continues:

Since the 0.08 for adult drivers was set in 1978, New Zealand and international research has consistently demonstrated that an alcohol limit of 0.05 or lower saves lives and prevents serious injuries. In Australia, New South Wales achieved an 8 per cent reduction in fatal crashes, and Queensland achieved an 18 per cent reduction.

The lower one sets the limit, it is likely the fewer crashes there will be. But one has to look at both sides of the equation. One could have a zero blood alcohol limit for all adults, but that will them criminalise most of the population. If you have one drink at work and drive home, you would be breaking the law.

Any advocacy that focuses just one one side of the equation, is unbalanced. One has to look at the benefits and the costs. If one only focuses on road injuries, then you would set a maximum speed limit of 30 km/hr on open roads. It is about a balance between safety and convenience.

Safer Journeys estimates that an adult drink-drive limit here of 0.05 would save between 15 and 33 lives and prevent 320 to 686 injuries every year. This corresponds to an estimated annual social cost saving of between $111 million and $238 million.

Well my reading of the document says:

Now of the 211 drivers killed, 171 were tested for blood alcohol levels. 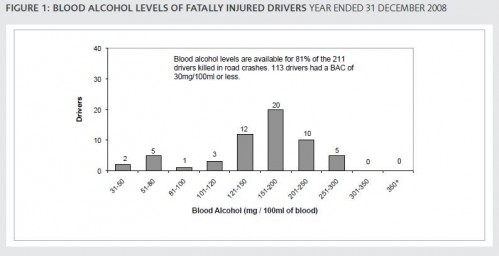 The chart shows that most drivers killed are not even close to the 80 limit. They are at least double it, sometimes triple it. This is where I think the focus should go.

But there were five dead drivers with a BAC between 0.5 and 0.8. So would changing the law save those five drivers, and an unknown number of passengers?

This is why I am unconvinced that a lowering of the limit for adults will have much of an impact on the road toll.

A possible compromise may be to increase the age for the youth limit from 20 to 25. That road safety data shows that 20-29 year olds are still far more prone to fatal crashes, then over 30 year olds at differing levels of blood alcohol.