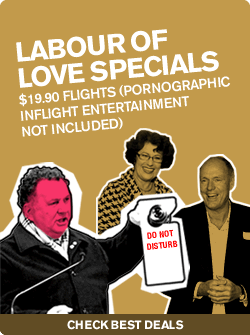 Air New Zealand have got into the fun with this advertisement for their $20 specials. Heh.

Progressive leader Jim Anderton racked up a $22,000 bill on his ministerial credit card during a month-long trip to Europe in 2003.

He also spent $324 on a gift from Kirkcaldie & Stains before leaving on the trip.

The cash splash while in Europe  from April 9 to May 3 included $3500 at Hotel Hilton in Frankfurt, $3400 at Hotel Conrad in Dublin, $2600 at the Palace Hotel in Helsinki and $1000 at a restaurant in Vienna. His wife and private secretary went with him on the trip.

At the Frankfurt hotel he spent about $2100 on “room charges”. No details are provided in the documents.

How do you rake up $2,100 in room charges??? That would tire even Shane Jones out.  I sure hope there are some details.

It also wasn’t easy on the tax-payer’s back pocket sending Mr Cosgrove and his wife to Beijing for the 2008 Olympics. The accommodation for the nine day-stay in an executive deluxe room at China World Motel alone was $6,388.

A spokesperson for Mr Cosgrove said the hotel was designated by the Chinese government, with the Minister not allowed to choose.

Then Prime Minister Helen Clark agreed Mr Cosgrove had to go but questioned the length of the stay in a hand written note on the proposal for overseas travel.

I have no issue with the Minister of Sport attending the Olympics.But like Helen, I would question whether nine days is excessive.

Labour MP David Cunliffe travelled to London in his capacity as the Minister for Communications and Information Technology in March 2007.

The receipt from the staff credit card used to pay for the trip shows Cunliffe and one other person booked two rooms at The Westbury Hotel in Mayfair, London.

The Westbury is a five-star hotel on London’s exclusive Bond Street. The hotel charged $441 per night for each of the two rooms Cunliffe booked. Lunch at the hotel cost $117 and breakfast was $66.

I thought the opening sentence is actually a bit misleading as one could assume the $1,400 is the room rate. Only later on do you see the actual room rate is NZ $441 a night which frankly is pretty damn reasonable for London.I don’t see anything inappropriate there.

In the Herald, Chris Carter defends his spending as “minor mistakes”:

* $607 for some campaign posters and 14 British Labour Party coffee mugs:

“We had visitors [to the office] every hour and we served tea and coffee. While in a bookshop [in London] we bought 14 cups – they’re bright red and say ‘Labour’ on them. We could have bought cups in Briscoes but these had ‘Labour’ designs.

I’m amazed that this one was approved by Ministerial Services. The taxpayer should not be funding campaign posters from the UK and if a ministerial office needs some coffee mugs then one can get some very nice one locally for around $5 each – from Briscoes in fact. It looks like the “Labour” cups cost around $40 each.

“We were told by Ministerial Services in Wellington that when a Minister goes to Australia you must use cars provided by the Australian Government because of security reasons.

“They’re horrendously expensive but that’s how it was. [We were] a prisoner of the Australian rules and had no choice. I would have been just as happy in the cheapest taxi.”

I am highly highly suspicious of this claim, and hope media ask some more questions on it.

My understanding is that many Ministers use taxis in Australia. I think Anne Tolley recently went there for two days and her taxi bills were around $80 to $100. So this requirement or policy Carter refers to has either lapsed or never existed.

Also remember that Chris Carter had the rental hire in his partner’s name in the Northern Territory. How would that be possible if the Australian Government really insisted that you had to use Government limos if you are a visiting Minister.

I think some calls to the Australian DFAT are in order!