On Wednesday I did a tour of the historic Speights Brewery in Dunedin, as part of the Science Festival.

It takes around 90 minutes, which includes a very pleasant tasting session at the end.

It starts with a good display of Cooperage, which are the barrels that the beer was storied and transported in up until the 1950s. Except they are casks not all barrels. A barrel is 36 gallons of beer. You also had firkins (9G), kilderkins (18G), hogsheads (54G) and butts (162G). These terms have been used since 1854.

Saw some ancient Egyptian hieroglyphics warning people of the ill effects of drinking too much alcohol. Yes they even had Law Commissions 3,000 years ago 🙂

I learnt where the saying to “scull” your beer comes from – the Vikings who used to literally drink beer from the skulls of their enemies. 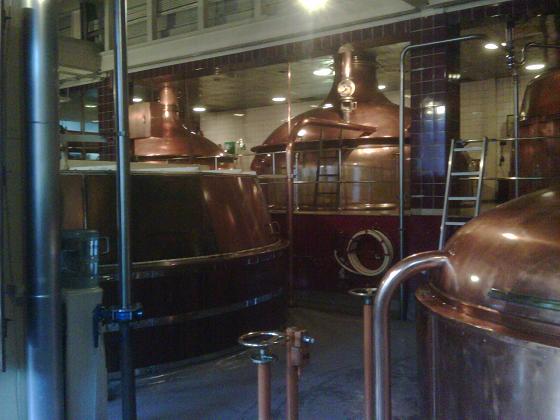 The tour is a good mix of the history of beer, the history of Speights and a look at how the beer is brewed today. We got to taste the actual barleys used in making the beer (think burnt toast).

At the end of the tour we tried the six types of beer they had on tap – the Pilsener proving the most popular.

The tour guide was very engaging, and it was interesting to learn about the history of the brewery, the three founders of Speights etc. Highly recommended tour for beer lovers if you are in Dunedin, and a good opportunity to learn a bit about the science of beer making.