The Government is about to be hit by an advertising campaign modelled on the iwi/Kiwi National Party billboards that stirred racial tensions in the 2005 election.

Now Prime Minister John Key and the National Party are the butt of the campaign being mounted by the Coastal Coalition, a group formed out of concern the Government’s move to change the Foreshore and Seabed Act may give control of beaches to Maori.

Coalition organiser Hugh Barr, secretary of the Outdoor Recreation Association, said the campaign was set to be launched with its first six-metre-wide billboard going up in Wellington today.

The association was going to put up as many billboards as it could afford with money raised from the 8000 people who had signed up to the coalition’s website, he said. Supporters included former ACT deputy leader Muriel Newman and former National Party members, chambers of commerce and boating, fishing and marine charter groups..

The signs were designed by advertising executive John Ansell, who produced the hard-hitting billboards for National Party leader Don Brash in the 2005 election campaign.

Somehow I suspect these billboards will not be condemned by most of the left, as the Iwi/Kiwi ones were.

I’m not sure which billboard designs they finally went with, but John Ansell blogged the designs under consideration, such as: 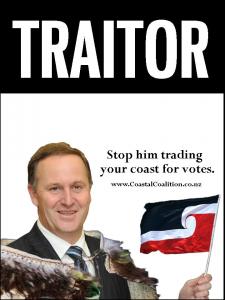 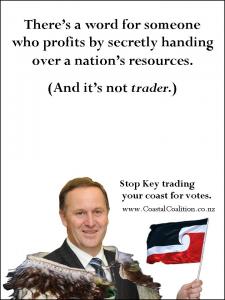 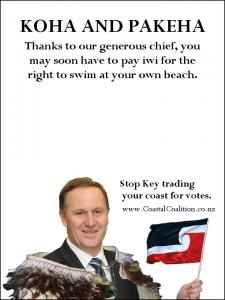 They will certainly be noticed.