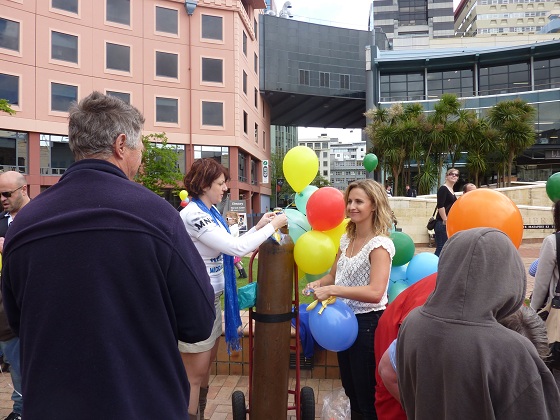 Well this was the best Labour Day rally I have been to. No angry people with angry placards. No scores of paid organisers busing in thousands of people during a paid. Just thousands of Kiwis coming into town and giving up a couple of hours on a public holiday to celebrate the NZ film industry and send a clear message that regardless of what has happened, Kiwis wants The Hobbit filmed in NZ. 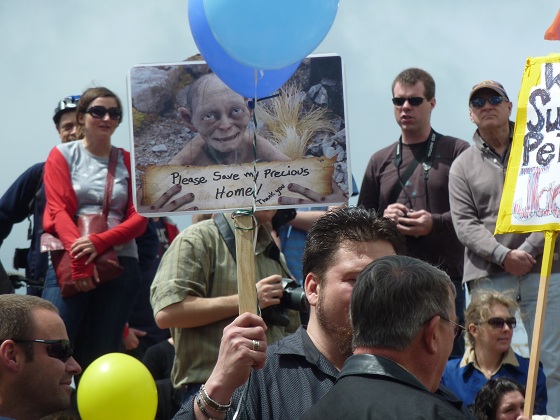 This was my favourite placard – Gollum wanting his precious home saved. 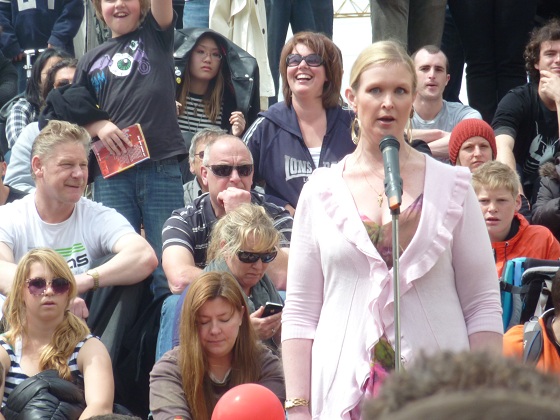 I’m sure I should know this person is. She didn’t speak, but she sung beautifully.

First speaker up was Wellington Mayor, Celia Wade-Brown. Celia got a good reception and applause, but the cheers for the next speaker were almost deafening. 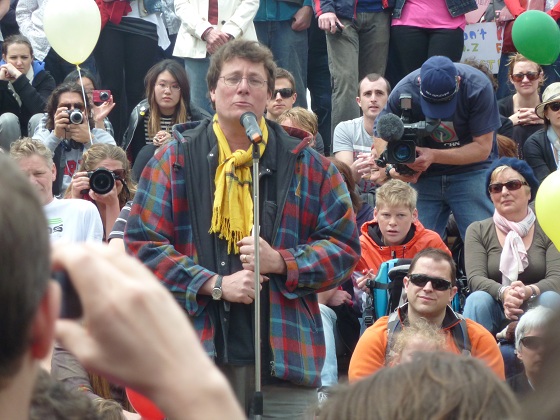 Sir Richard Taylor was as modest as usual, but the star of the show. He spoke with passion about what they do, and why they want The Hobbit to stay here. He also read out a letter from Peter Jackson who expressed similar sentiments. Jackson also, in his letter, warned that we do not want to become a state of Australia, and that the NZ film industry should work together with its own guilds, rather than bring in outsiders who care nothing for the NZ film industry. This got loud cheers. 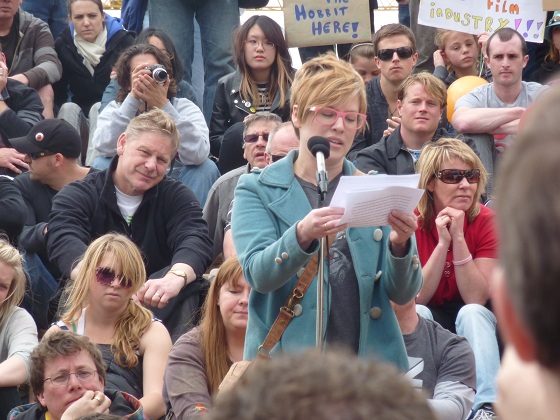 This young lady was one of the highlights. She is a young film-maker who came here from the US, and just raved about how wonderful it is here, and that she owes so much to NZ.

The casting director for The Hobbit also spoke and told some lovely stories of how they had to delay filming one scene for a week because all the Elves in Otago had exams, and another delay was when the warriors could not make any battles as it was muster week. She said in the US she’s get screamed at by the producer but here Jackson just smiled and said he was glad the elves would be less stressed etc.

There were heaps of kids there, and you could see them engrossed as one guy from Weta spoke about how at the age of three he wanted to be involved in movies and especially a Spielberg. He talked about how Richard Taylor hired him and kept trusting him and giving him more and more jobs and how his last job was as head of design for the Tintin movie, produced by Spielberg – his message was in NZ, your dreams can come true.

All the speakers got across that the NZ style of is quite critical to the sucess of our industry – the relaxed style, the willing to work to get the job done, the team-work, the passion, and the flexibility. I reflected how different this approach was to the inflexibility that MEAA seem to want. Note this was just my interpretation – no one actually mentioned MEAA. 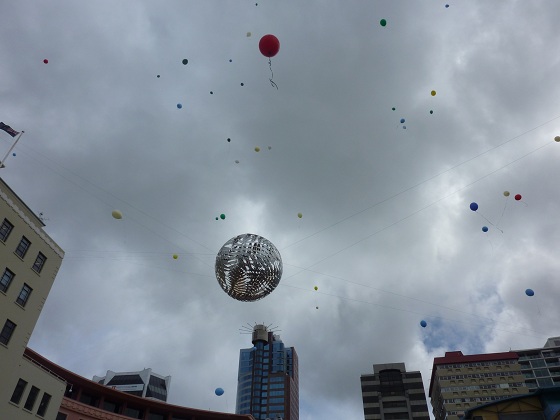 The kids let go of their balloons at the end after Richard Taylor spoke again. He told a wonderful story of how he was helping fit armour to a rider of Rohan, and he looked up to notice she was a fairly elderly lady. They were filming in Twizel. They got talking and she mentioned how sadly her horse yesterday had twisted a leg. Taylor asked her if she was going to be a foot solider then, and she replied that no – she went up the high country yesterday, roped herself a new horse, broke it in overnight – so she could stay play her part as an extra. He says that is his favourite memory of the filming.

As I said it was a lovely occasion, and hopefully Warners will see the coverage on the news tonight, and it may help just a little bit with their decision.

I’ve reflected before on the economic damage that would occur, if NZ lost The Hobbit. But after that rally, I’ve actually decided the job losses and economic losses would not be the biggest price we pay. I think we would lose a certain amount of our collective self-esteem or soul as a nation. All those stories about how much better the Kiwi film-making industry is that in Hollywood etc would become just legends from the past, rather than tales of our future.

Hopefully the back-down from the MEAA did not occur too late, for the film to remain here. And even more importantly, perhaps some lessons will be learnt about not resorting to global boycotts unless you can justify it.

Congratulations to the organisers of the rally.