If you’re at Vic Uni, make sure you vote in the final of Academic Idol, for the most popular lecturer. 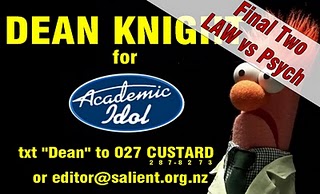 It not often ones goes for a lawyer, but the competition is from the psych department, and lets face it almost all psychologists are nuts themselves. Also Dean is a great guy.

THIS WEEK’S QUESTION
If you were going to commit a crime, which one would it be and how would you justify it to the public (if you get caught)?
Bonus question: Capybaras—yay or nay?

DEAN KNIGHT, LAW
“C’mon! You can’t ask a legal academic that question. We believe in the Rule of Law! Well, perhaps. Maybe. Or maybe only one or two of the different conceptions of the Rule of Law…
Anyways, the whole point about being a smarty-pants lawyer is we know what’s illegal and what’s not. And we know how to argue about the grey areas in order to avoid being convicted. No need to justify anything if you don’t commit the crime.
– Parking in a loading zone (Land Transport (Road User) Rule 2004, r 6.4)—not a crime after 6pm, unless the sign says “At All Times”.
– Urinating in a public place (Summary Offences Act 1981, s 32)—not a crime if you reasonably believe no-one can see you.
– Drinking booze in a liquor ban zone (Local Government Act 2002, s 147)—the Police first have to analyse and prove the liquor is more than 1.15% strong.
– Stealing a baby’s identity to get a false passport (Tough on Crime Act 2010, s23)—you’re immune if you’re a member of the Sensible Sentencing Trust.
– Breaching any law of the land in the name of the earthquake recovery effort (Canterbury Earthquake Response and Recovery Act 2010, s 6)—not if you have a note excusing you written by Lord Gerry VIII…

Now this is actually damn useful advice – how to legally park on loading zones, urinate in public and drink alcohol in a ban zone.

A final note from Dean: