To my surprise my status as co-chair of The American Politics Appreciation Society got me an invite to the reception for US Secretary of State Hillary Clinton.

Around two dozen people there all expressed amazement – not at me being there, but that I was wearing a suit. I explained that if they were the most powerful woman in the world, then I’d might wear a suit for them also. 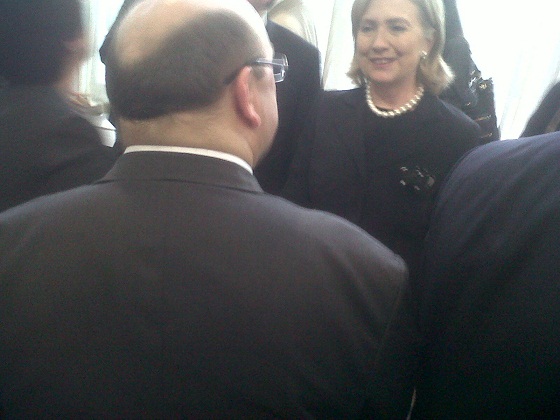 Audrey Young snapped this photo of my brief conversation with Hillary, which mainly consisted of me saying how popular Chelsea was with those who got to meet her, when she was here in 1999.

Clinton and McCully spoke for around 20 minutes. Clinton is the absolute political professional – excellent at speaking with few notes, and working a room. She of course spent over a year campaigning to be President and came closer than any other woman has to winning that job. A lot of the discussion was about whether she might still manage it – either in 2016 (my theory) or 2012 (the theory of the stupid people who don’t understand a Cabinet Minister can not challenge a President). By 2016 she will be 69, but the US is not so anti older politicians – plus she looks considering younger than she is.

I’m actually more optimistic about Obama’s chances of re-election than most I chatted to there. If the economy improves, his chances will improve. Also the GOP controlled House may overplay its hand and get a backlash. Last but not least the choice of Republican candidate will be crucial.