I blogged yesterday about the claim to remember McDonalds opening in Porirua, which happened when Kris was one year old. Since then, Whale has produced a series of photos showing other events Kris remembers being at. This is my favourite. 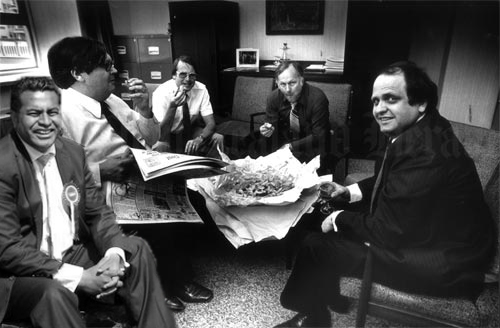 A reader has sent me a copy that Labour has distributed around the electorate. It is below.

Just hold your screen on its side to read it. Anyway the key quote is “I had a great start because my family settled in Mana”.

Now this is pushing the truth to breaking point. Yes Kris has cousins and uncles and aunts in Mana whom he visited. But he was born and raised in Christchurch. 99% of people reading his brochure would take his statement to imply he grew up in Mana.

I don’t personally think it is a huge issue that Kris was not raised in Mana. Neither was Winnie Laban off memory. But this is the second time that Labour and Kris has pushed the boundaries of the truth to create a false impression – they obviously think it is vital.

One could also quibble over his slogan to vote Faafoi to vote for more jobs for Mana. Never known a backbench Opposition MP to be able to create jobs – but that at least is a subjective view that can be debated.

It would be interesting if someone complained to the Advertising Standards Authority about the brochure, as that would give a ruling on whether or not the brochure stretches the truth so far as to be misleading.

I had an uncle and aunt in Perth whom I visited occasionally. I would never claim “I had a great start because my family settled in Perth”.