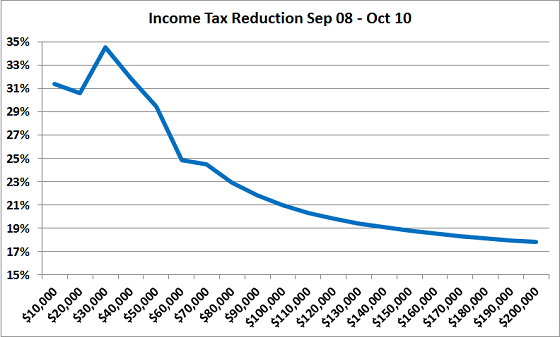 The way Labour go on, you would think the only people who got tax cuts in the last three years were the despised “rich pricks”. Now of course when you cut taxes, those who pay more tax get a larger tax cut. Just like how a bank which pays 5% interest on your investment pays mroe money to someone with $10,000 invested than $2,000 invested.

What I thought would be interesting is to look again at the percentage reduction in personal income tax from September 2008 to October 2010.  These include the IETC for people not on WFF.

And you’ll also see the filthy rich pricks earning over $100,000 have had percentage tax cuts of less than 20%.