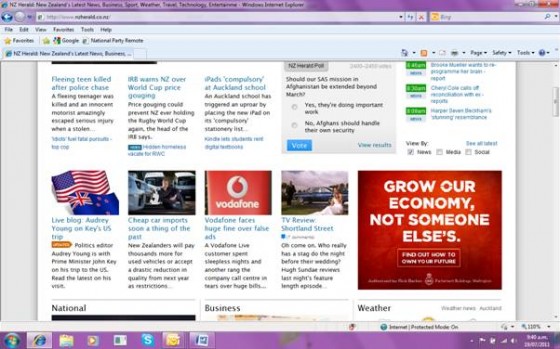 Readers will have probably seen Labour’s advertisements for their campaign website on different online media. The actual advertisements are taxpayer funded and authorised by Chief Whip Rick Barker.

The site they take you to is a party funded site authorised by Chris Flatt. Both the advertisements and the site are clearly election advertisements.

The advertisements are legal under parliamentary rules, but as usual with Labour they push the rules to the absolute boundary. They have combined parliamentary and party ads and sites so they have the same look, slogans and feel. It is as close as you can come to have the taxpayer actually fund advertisements saying “Vote for Labour”. They’re doing it in an slightly indirect way.

All parties fund material from their parliamentary budget which is “political”. You can’t easily draw a line between political and parliamentary. But this current campaign is around 1% parliamentary and 99% political campaigning. As I said before Labour have a long history of pushing the rules to their limit, or as they did in 2005 beyond the limit.

I look forward to 26 August when the taxpayer funding tap gets turned off for parliamentary parties’ advertisements.