A guest post by Mike Wilkinson, who analysed the economics of retail payment system development in a recently completed MA thesis.

While travelling overseas, it’s easy for New Zealanders to see that we use our payment cards a lot more than people from other countries.  Indeed, the figure below shows this observation is backed up by statistics from official sources: relative to many other developed countries, the nation’s debit card system (known as EFTPOS) is very well-used. 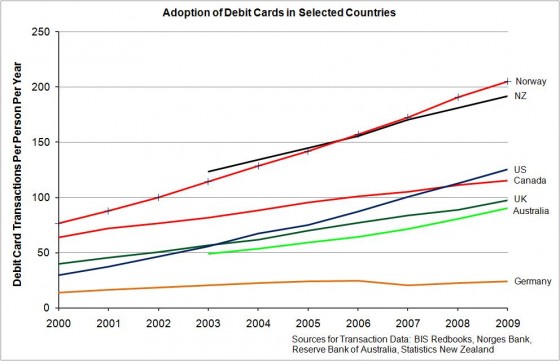 What makes it so?  Many would have you believe it’s because such a system was developed here, first.  Yet, the second figure demonstrates that that’s actually a big urban myth – even in my small sample of developed countries, New Zealand was by no means the first to have such a system.  That title looks like it goes to the United States. 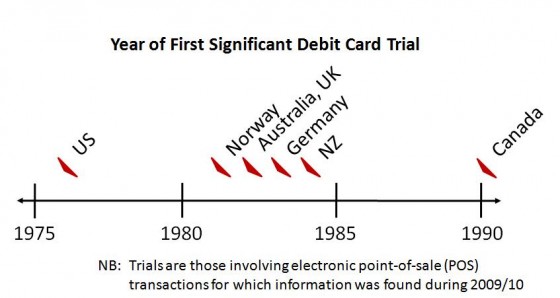 If it isn’t that EFTPOS was developed here first, what is it about our country’s system that makes it so useful?  The two most well-used systems in this sample, New Zealand’s and Norway’s, have one thing in common: merchants or retailers in neither country pay significant fees for transactions completed at the point-of-sale.  In both places, they generally need to buy or rent terminals, but, once they have those, most are quite happy to accept transactions for nothing at all.  In other countries, merchants are charged fees that make them unwilling to accept small transactions; instead many prefer their customers to pay with cash.  Meanwhile New Zealand and Norwegian consumers are required (or at least during the years following the systems’ introduction, were required) to pay transaction fees for debit cards.  That these consumers still used debit cards demonstrates that many people really don’t like using cash.

In the case of Norway, such an approach to pricing was encouraged by the Norwegian Government.  What about New Zealand?  Why did the country’s banks adopt this approach even when their Australian parents elected to charge merchants fees?  The answer to this question is firmly rooted in the history of the country’s banks, particularly their regulation by our Government.

In the period following World War 2, New Zealand’s banking system was characterised by intrusive, prescriptive regulation.  Organisations were separated into three groups: trading banks, thrift institutions (including trustee savings banks) and other financial institutions.  In 1984, members of the first two groups introduced their own EFTPOS trials, which some readers may recall.  The trustee savings bank system was called Cashline.  The trading banks’ system, called Quicksmart, was operated by Databank, their joint-venture originally created in the 1960s for processing cheques.  Evidence demonstrates that an adversarial relationship existed between the groups with little prospect of smooth cooperation over a combined system.

In 1987, legislation passed by the Lange-Douglas government came into effect, substantially changing the way banks were regulated.  Under it, any organisation could become a Registered Bank, if it met permissive criteria administered by the Reserve Bank.  The climate for cooperation changed substantially and a merger of Cashline and Quicksmart was being contemplated.  However, the 1987 sharemarket crash made banks much more conscious of costs.  In 1988, two former trading banks, BNZ and ANZ, decided to withdraw their support for Quicksmart.  The two remaining participants, National Bank and Westpac, purchased the EFTPOS assets from Databank, renaming the system, Handy-point.  In order to attract merchant account business, they decided not to charge merchants transaction fees for this new system.

The Handy-point system proved successful and its approach to pricing was adopted when it was merged with Cashline to form Electronic Transaction Services Ltd (ETSL) in 1989.  BNZ eventually joined ETSL, which was later renamed Paymark.  ANZ invested in its own EFTPOS services that interconnected with ETSL, which were later brought into a company ANZ had purchased, EFTPOS New Zealand Ltd.  National Bank and Westpac and, later on, the owners of ETSL were happy to cooperate with the other banks because they saw EFTPOS as a marketplace rather than as a proprietary asset.

New Zealanders have benefited from their successfully developed EFTPOS system because the country’s comparatively light regulation of banks fostered cooperation, and because at no stage has our Government become involved by choosing among the relevant systems.  In my view, were it not for the Lange-Douglas reforms, New Zealand’s EFTPOS would have developed much less successfully.

The success of EFTPOS makes the Snapper bus ticketing stored-value system more useful for non-bus related payments because it can be used for faster payments than can EFTPOS.  The Snapper system is also lightly regulated (relative to how comparable systems would be regulated, overseas), allowing it to offer payment services cheaply.  These two factors combine to make Snapper one of the few privately-owned stored-value systems based on public transport that can be used for other sorts of transactions in the world.  Snapper’s development shows that New Zealanders continue to benefit from the country’s market-driven approach to banks and to payments.