Have just published the Curia polling newsletter for August 2011. The summary page is:

The average of the public polls has National 24% ahead of Labour and able to govern alone. The gap in July was 22%, so the gap widened in August, as it has for the last three months.

Australia may end up with a new Prime Minister before the next election. Julia Gillard’s approval rating has fallen 18% in one month to a net -45%.

In the United States Barack Obama is in freefall. His approval rating has dropped 12%, his handling of the economy by 10% and the right vs wrong direction for the country is down 14% to around the lowest point it was under George W Bush. Meanwhile Texas Governor Rick Perry has all the momentum for the Republican 2012 nomination.

In the UK the riots have had little change on the polls, with Labour 4% ahead of the Conservatives.

In Canada the Conservatives have lost 5% to the New Democratic Party. This is probably due to sympathy at the death of long-time NDP Leader Jack Layton.

We also carry details of polls in New Zealand on the Labour leadership, the Rugby World Cup, asset sales, KiwiSaver, law & order and the normal business and consumer confidence polls.

And a graph from the newsletter: 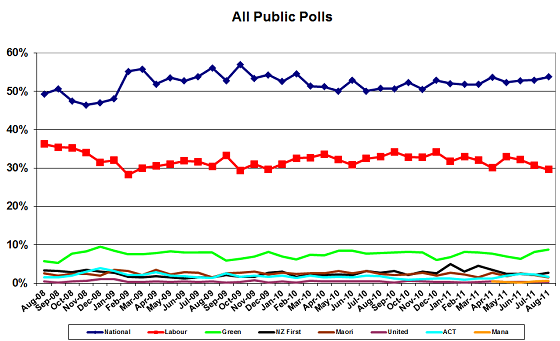 There’s been a quite clear trend for the last three months, and Labour on the average of all polls is below 30% for the first time since 2009. Just over 11 weeks to turn the trend around.