I saw He Reo Aroha on Wednesday night at Circa. It’s a Kiwi love story. I’m not a big love story kind of person so wasn’t sure if it would be my thing. And for the first 20 minutes or so my doubts remained. But as the play went on, I got more and more caught up with the characters and more and more wanted to see how it would end – who would die, who would live, and would it be happy ever after. 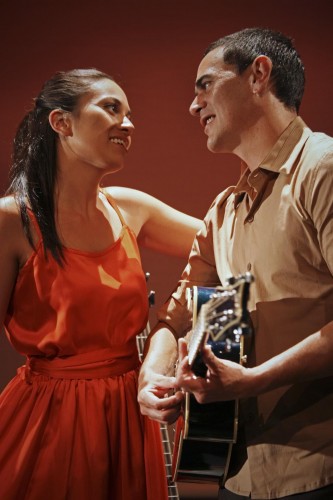 The two actors were Kali Kopae and Jamie McCaskill. Kopae is an amazing singer, whom I had seen before as one of the Beatgirls. I had also seen McCaskill previously as the titled role in Robin Hood.

Not only were they both great singers and actors, but they had real chemistry together. Kopae played Kaia a young Maori girl who left behind her childhood sweetheart to hit the big time in New York as a singer. However her career doesn’t fill the ache in her heart.

McCaskill plays Pascoe. Like Kaia he can sing, but his duty is to help his father on the fishing boats. Eventually he gains his own boat as he throws himself into his fishing career, to fill the void left by Kaia.

Eventually Kaia returns to New Zealand to try and rekindle the relationship. But it isn’t that easy of course. There’s rough seas (literally and figuratively) ahead and tragedy.

What I liked about the play is it isn’t just a love story, but very much a New Zealand love story. The accents, the mannerisms, the shyness, the job in the packing factory, the fishing all ground the story firmly as a Maori and New Zealand one.

The show lasts for 75 minutes and runs until next Friday (30th). Both myself and Contractor Girl thought it was excellent and enjoyed the experience.