I was up in Hamilton a couple of weeks ago as the guest speaker at a Chamber of Commerce Afters Fives function. The function was hosted by Child Matters.

Child Matters, formerly CPS , specialise in education to prevent child abuse. In the 15 years they have operated they have trained 15,000 adults how to recognise and respond to child abuse. If one can recognise it is occurring at an early stage, then it is the fence at the top of the cliff, rather than the ambulance at the bottom.

At times, I despair of the well publicised child abuse cases. I have problems recognising than human beings can actually do stuff such as stick babies in clothes dryers or hang them on clothes lines with clothes pegs. The easy response is to just categorise those who do such things as sub-human, and conclude nothing can be done but to stop them breeding.

However not all cases are as extreme as the ones we read out in the media, and early intervention can work in many cases. 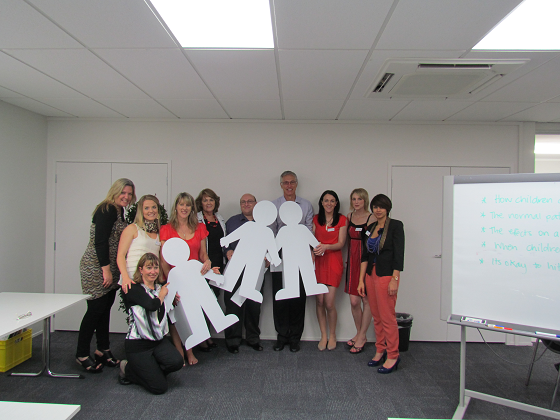 A photo of me with some of the Child Matters team. The cardboard cut outs are for Buddy Day, on 18 November. There will be 180 buddies in Hamilton (representing 1,800 cases of child abuse in the Waikato last year) that will be lent out to schools, childcare centres and community groups to look after for the day. It’s a fun child-centric way of talking about child abuse, and raising awareness of keeping kids safe.

Some sad but interesting facts from their FAQ on common myths:

Myth: The most common form of abuse suffered by children at home is sexual abuse.
Fact: Children are seven times more likely to be beaten badly by their parents than sexually abused by them.

There’s a wealth of information on their website, for those who want to know more about what they can do to help.