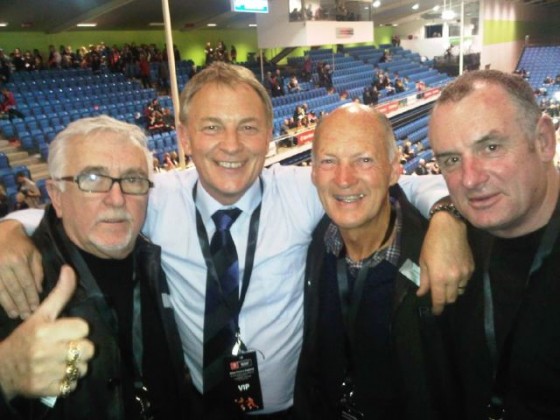 Keeping Stock blogs on the damage control from Labour, and has a caption contest for what the Mad Butcher is really thinking.

The Fenton/Leitch issue seems to keep rolling on. Dene Mackenzie writes in the ODT:

However, it appears that some Labour MPs have had a bit of a brain explosion on Twitter with Trevor Mallard, the Labour campaign co-ordinator, lashing out at University of Otago political scientist Bryce Edwards.  …

But the largest implosion surely must have been Labour MP Darien Fenton, who on Facebook took aim at one of New Zealand’s most recognisable faces and voices – Sir Peter Leitch, the Mad Butcher – for his support of Prime Minister John Key. Sir Peter said he was a friend of former prime minister Helen Clark, but had not voted for her and that he was backing Mr Key.

Ms Fenton posted: “So, Mad Butcher, you have a choice, but so do I.

“Sucking up to John Key big time. I’m never going near him again.”

Sir Peter drove himself to Auckland as a young man, finding jobs where he could, working harder than many around him to get into his own butcher shop in South Auckland. He has become the face of rugby league in New Zealand, supporting the “Mighty Vodafone Warriors” through thick and thin.

Ms Fenton implied she would only shop at places where the owners agreed with her political views, forgetting probably that many workers in and customers of Mad Butcher shops could be Labour voters – especially in South Auckland where Sir Peter’s generosity is legendary.

Given that Mr Mallard is the campaign manager for Labour, it must be assumed that part of the campaign strategy is to use social media to belittle anyone who disagrees with the party on any issue.

Those latest examples all happened within two days of each other, but it is not the first time it has happened.

It is sure not to be the last.

This cyber-bullying is all too real. Massey University Associate Pro Vice-Chancellor and specialist in political communications Claire Robinson tweeted this yesterday:

Claire presumably is also a member of the VRWNLLWC.

Russell Brown moans that the media have given this issue so much coverage, but himself notes:

Fenton never complained when Leitch was Clark’s handbag. Leitch, a businessman who built a large retail chain, should also not be mistaken for a class warrior. And mostly, at a time when Phil Goff continues to struggle not to suck all the charisma out of any room he’s in, a Facebook blurt that puts the party on the wrong side of Warriors Fan No. 1 was spectacularly unhelpful to Labour. …

Such sentiments are widely – if somewhat lazily – accepted in the political blogosphere as proof of Labour’s “arrogance”. But Labour doesn’t have a lot to be arrogant about at the moment. What you’re hearing there is grief, anger and frustration.

And finally we have Grant Miller at the Manawatu Standard:

Among the idiotic things Ms Fenton said was that she would never go near Sir Peter again. She also labelled him a sycophant and accused him of sucking up to the Prime Minister.

“I choose not to buy stuff from those who support Tories.”

I mean, how dare a working class chap like Sir Peter neglect his moral duty to despise Mr Key – does the Mad Butcher not know the nation’s leader is a Tory? Does Sir Peter not know he is basically obliged to support Labour?

In Ms Fenton’s world, Mr Key is the leader of the enemy.

In her world, the business interests of Tory supporters are legitimate targets. Failure to support Labour can be a moral or intellectual failure if that sin is committed by people who should know better.