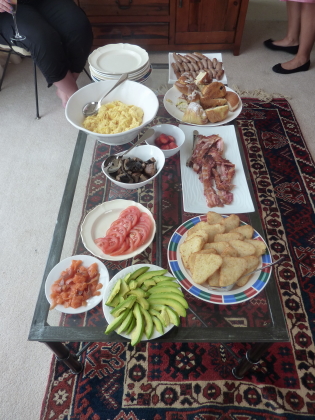 Post Day One Sevens brunch for our group. Very good at soaking up the alcohol.

Day Two was great. I was convinced New Zealand would lose after their semi-final vs England, where they played awfully. And Fiji was very impressive in their semi-final.

But my God, what a final. I can’t recall seeing a better performance from the NZ Sevens team. Four tries in the first half. And it wasn’t that Fiji were playing awfully – more NZ was playing very very well. The Fijians got quite bad tempered as the game went on – I don’t think they are used to being thrashed.

So a great finish to a very fun tournament. The only downside for the girls is that the Ultimate Warrior never turned up again. One of them spent most of the day looking for him!