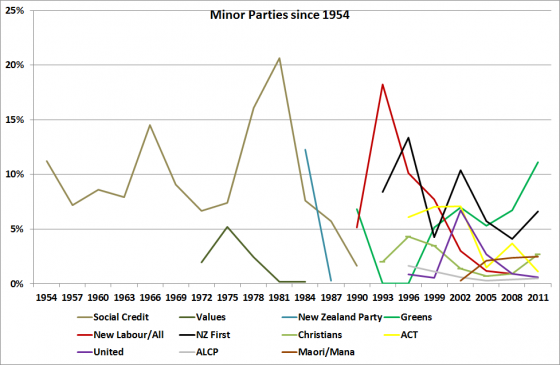 This graph looks at the various minor parties since 1954. Prior to 1954 no minor party got a significant level of support at an election.

Social Credit were the dominant third party from 1954 to 1990, when they effectively disappeared. It’s interesting that it was all downhill after their peak support in 1981. Incidentally they may have never made it into Parliament if Ruth Richardson in 1975 was successful in her challenge to Sir Roy Jack in Rangitikei, as it was his by-election two years later that got Bruce Beetham into Parliament.

Following them was the Bob Jones New Zealand Party which formed to get rid of Muldoon, got 12% in 1984, and then basically disbanded.

The red line shows New Labour, which became the Alliance and then split off the Progressives. Their peak was 1993 and then all downhill.

I’ve grouped the different Christian parties together (CC/CH/CD/Kiwi/Family/Destiny/Cons) and as you can see the peak was 1996 but an increase in 2011.

The decline of ACT is apparent. They kept their support for three elections, dropped in 2005, recovered in 2008 and then right down in 2011.

As they are always on the ballot, you can see ALCP since MMP began in 1996.

I’ve also combined together the Mana and Maori parties so one can see overall support for Maori identity parties over the last four elections.

And United is there also, with their big result in 2002 obvious.