Peninsula grabbed my interest from the opening scene, and never lost it. The production at Circa was brilliant, and excelled in every way.

Peninsula is the story of 10 year old Michael, growing up in Duvauchelle in Banks Peninsula in 1963. The play captures both the magic of childhood, but also the feel of growing up in rural New Zealand in the 1960s. There were many parts of the play which I could relate to, and brought back memories of childhood. 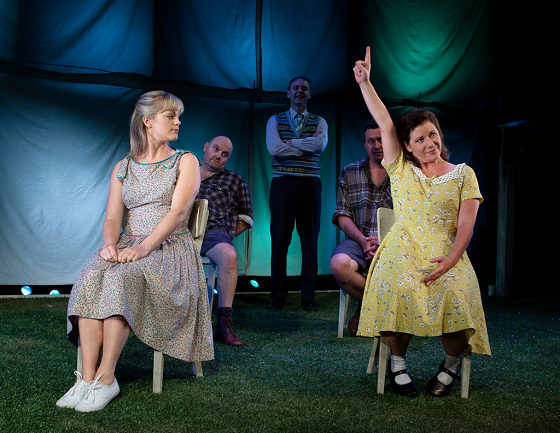 There are five actors. The opening scene has them as four kids and their new teacher. Michael (Paul McLaughlin) and Ngaire (Laura Hill) are brother and sister, and capture the sibling dynamic so well.  Alex (Phil Vaughan) is Michael’s best friend and Lynette is the class know it all (Michele Amas). Their new teacher is Mr MacIntosh (Jason Whyte) who manages to get the kids, especially Michael, interested in science.

However each actor plays two roles, and the way they seamlessly go from one character to another is part of what makes the play so great. The director has done a magnificent job with making the transitions work.

The set is simple but effective. Four school chairs, and two telephones on poles. Unheard but important is the post office operator who listens in to some of the calls and gossips about them. A screen is used a couple of times to show a pinhole camera in operation (again, brings back memories) and sound effects are deployed occassionally to good impact.

The major plot is about Michael wanting to investigate and map everywhere he goes, and how Mr MacIntosh has fuelled his love for science. The Christchurch science affair awaits.

I won’t give the plot away, but sadly it is not all plain sailing. Without being preachy, the play manages to touch on issues of bullying, of infidelity, of domestic violence and also of historic small town attitudes and prejudice. It doesn’t do this in a preachy way at all, but as part of a well told tale.  The play is lots of laughs, but there are also moments of real sadness, and even a bit of uncomfortableness.

All five actors did a great job bringing their dual characters to life. Michelle Amas was a very convincing know it all kid, but equally good as the satay at home mother who gossips and worries over her kid.   Laura Hill was superb as the bratty sister, and captured the mannerisms as if she really was a school kid. Hill also showed emotional depth with her adult character, as you could almost see the restrained sadness in her eyes.

Phil Vaughan’s child and adult characters were somewhat similar – both very cheeky and relaxed. Paul McLaughlin had the difficult role of Michael, portraying the nice wanting to learn kid who then changes as events transpire. And as previously mentioned Jason Whyte was comically funny as Pug and also excellent as the quiet, dignified teacher.

One of the best plays I’ve been to. It was a very New Zealand play, and all aspects of it clicked so well together to make it a brilliant experience.