Listening to the Greens, it could also be thought that one of China’s most senior figures has followed the Crafar farms saga in great detail, so much so that he is now prepared to place “enormous pressure” on the ministers making the final decision. This, again, seems fanciful. In pursuing the interests of a country with a fifth of the world’s humanity but only 7 per cent of its arable land, Mr Jia’s interests are surely far wider than one farm deal.

The Greens should have read his comments with a rather more open mind. Had they done so, they would have found plenty of encouragement for the future development of trade between New Zealand and China. Mr Jia refers to the “smooth implementation” of the ground-breaking free trade agreement signed in 2008 and the need for both countries to make good use of it to meet ahead of schedule a trade target of $20 billion by 2015. …

In terms of that balance, he could have been thinking of Fonterra’s plans, announced last Friday, to spend $100 million on two more farms in China’s Hebei province. This is part of the co-operative’s ambition to set up an integrated milk business in China that taps a growing middle-class demand for high-protein food. It wants its farming hubs throughout the country to be producing up to 1 billion litres of high-quality milk every year by 2020.

The Greens campaign against China is economically dumb. We even have the proof of how dumb it is. They railed against the FTA with China (as did then Foreign Minister Winston Peters).

So let us look at what these economic geniuses railed against:

Then after the FTA, exports surge, and imports continue much the same growth. The result is exports break $6b for the first time ever and the trade deficit is cut by over two thirds. 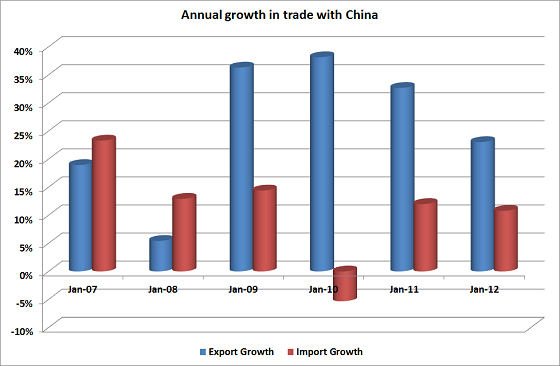 So imports growing far faster than exports. Then as the FTA is signed, export growth skyrockets up to 35% and even three years on is still at over 20%. These are incredible figures. The Greens argue it is pure coincidence and would have happened regardless. I’d stick a Tui billboard around that.

Here’s another couple of stats. In the year prior to the FTA coming into force our average monthly exports were  $186m. In the last 12 months they were an average $505m a month.

The annual exports in the year before the FTA were $2.24b. If they had stayed at that level over the next three and a third years our exports would have been $7.45b. Instead they have been $15.79b. So that is an extra $8.3b of export income that the Greens and NZ First railed against, and still rail against.

God knows how many fewer jobs we would have without that FTA, let alone the greater deficit and debt.