A couple of Fridays ago, I (and around 14 other media) spent a day touring Christchurch as guests of CERA.  I found the day quite fascinating as the scale of the issues is daunting. I’m going to blog some photos and commentary, and also at the end my overall thoughts on Christchurch.

The tour started with an amusing incident as we passed the new McDonalds. Gerry Brownlee said that sadly it was not yet open, as the Council had yet to approve its consent. This caused some amusement, and I wondered if Gerry had considered using his special powers to consent it himself 🙂

We started off looking at areas such as Kaiapoi, where in some areas house after house is noticeably damaged and of course abandoned. But we also saw the areas where new sub-divisions are planned, and construction about to start. I believe Ngai Tahu is planning what will almost be a small township of 2,500 on some of their land. 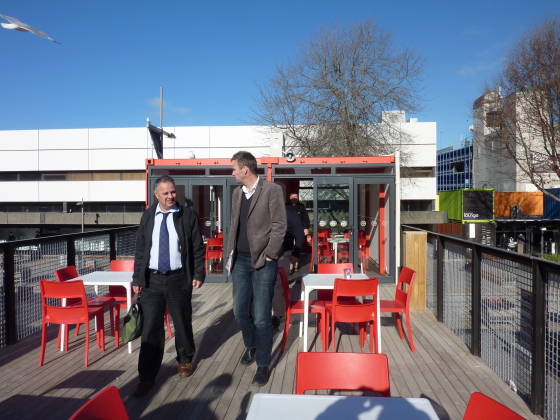 We headed into the Cashel Container Mall, where we met some of the CERA executives such as Roger Sutton and Warwick Isaacs. Sutton is a very quirky personality, who was telling us how the amount of milk he has to drink to cycle to the Port Hills, is equal to the amount of petrol a car would need – in terms of energy. This factoid is new to us, but not new to Gerry and the other CERA people who I gather hear such factoids on a daily basis.

A profile of Sutton in The Press has he has calculated it takes 7 grams of chocolate to run up the 11 floors of HSBC house.

Putting aside the quirkiness, both Sutton and Isaacs impressed with their plans. There were lots of questions from media types, and I found their replies to be realistic. They are well aware that they can not force investors back into the central city, and that the CBD will be smaller. However they are doing what they can to make investment occur, such as working with the former large tenants such as the financial institutions, the law firms, the Government sector to confirm they will relocate back to the CBD if the rental cost is similar to what it was.

I’ll come back to the investment challenge, but will note that some of the property investors in Christchurch are very “loyal” and keen to invest if it can make sense for them. The Cashel Container Mall came about because four of the major property owners got together and arranged for all the owners to temporarily donate their land into a trust which charges peppercorn rentals to the current retailers. 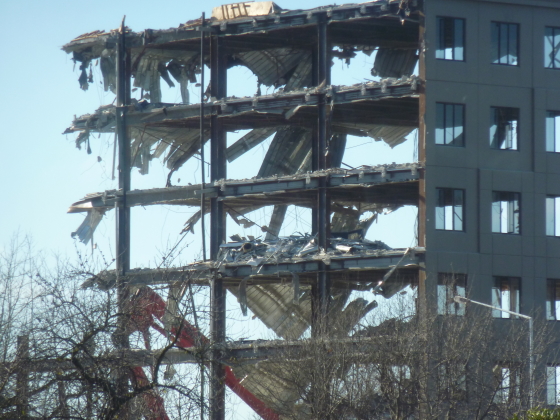 We headed into the restricted zone, and saw first hand the deconstructions occurring. 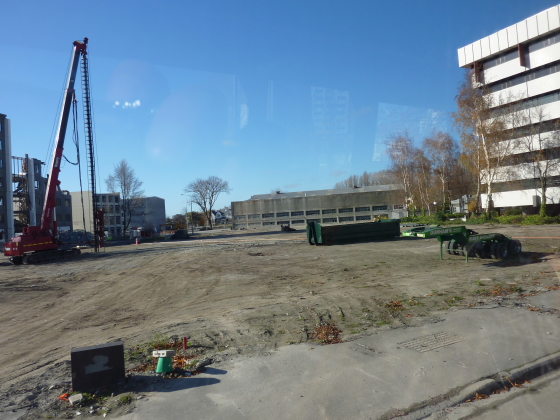 Large areas of the CBD are now clear. CERA believes that within 12 months all the deconstruction will have occured, which suggests that by then the construction plans will be known and pretty finalised. 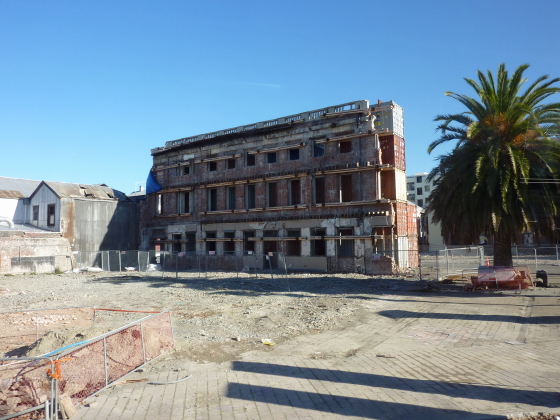 There is an opportunity here for Christchurch to get a city centre which is an improvement on the old one. Many locals will admit that the sad reality is that the city centre was in decline even before the quakes. One of the reasons for this is because so few people lived in the city centre.

The draft plan for the CBD is to have apartment blocks to allow 30,000 people to live in the inner city. That’s a great plan, and will make a real difference to its vibrancy.

However CERA was quite blunt, that the investment may not happen. The return on residential property is less than on commercial property in city centres. You get less per square metre. We won’t know for some months if there are property investors who will be willing to invest. One of the real problems is that the heightened requirements in the building code, means construction costs will be greater – possibly more than even insurance will cover. So the investment equation may not be there for new residential apartment blocks.

The other thing planned is to have some sort of logical sectors within the city. For example the courts, the police and the law firms will probably all be located next to each other. I quipped it was nice that prisoners would have shorter distances to travel 🙂 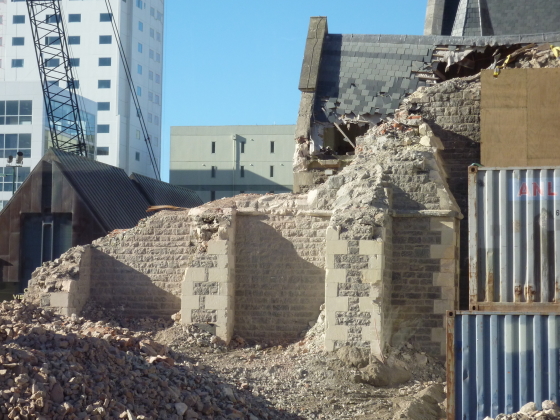 Part of the Cathedral. I am not an Architect, but having seen its exterior, I reckon anyone who thinks it is safe to preserve it is barking mad. It’s fucked. 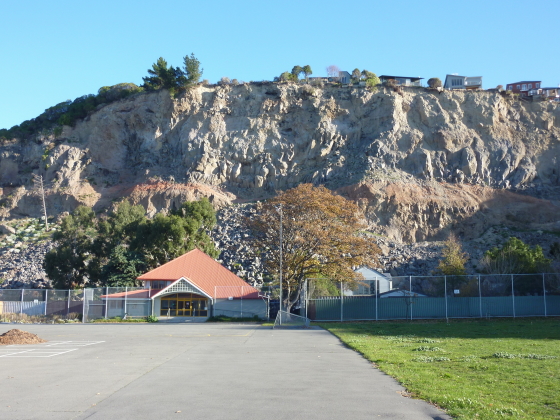 The CERA Chief Geologist took us to Redcliffs. Those houses had such stunning views, but are now obviously unsafe to live in. 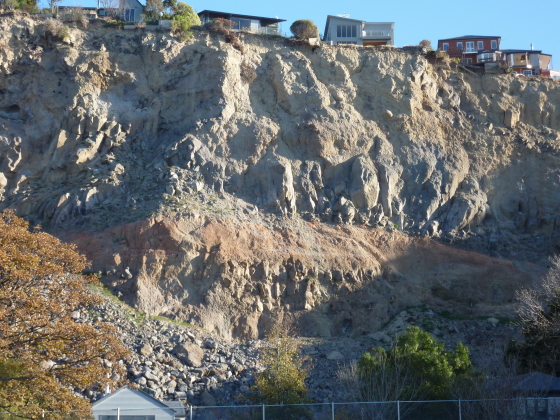 That’s a mighty big load of rocks that have come down. 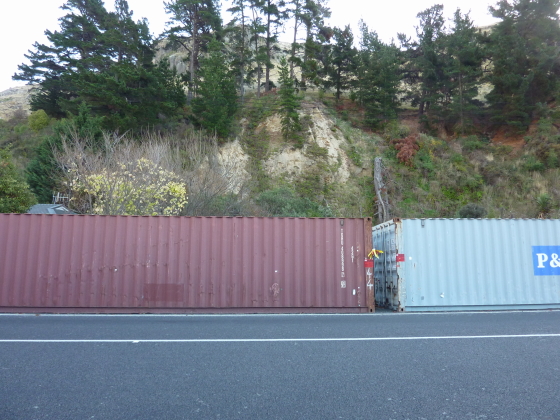 Further along, they have this temporary solution of containers, to prevent further rock falls spreading onto the road. A simple but effective idea. Who knew containers had so many uses – prison cells, retail shops and rock guards!

You have to be careful emerging from between the containers as you are straight onto the road. I remarked to Beck Eleven from The Press that it would be bad to get run over here, as all the other media would get to report your being hit by a car or truck. Beck agreed, but said what would really gut her is that she has no camera with her to take photos of my body after being whacked by a vehicle. We agreed that she could take my iPhone from my body, and use it to take and send in photos of the scene 🙂 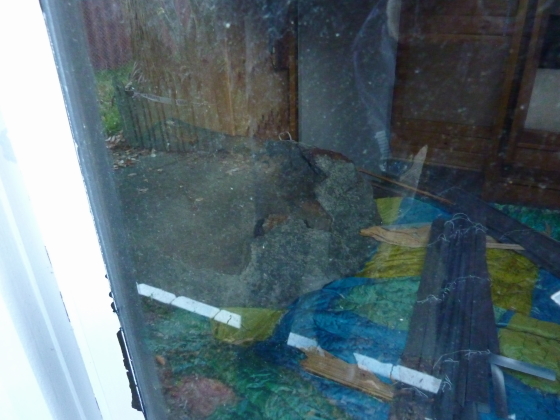 A bit hard to see through the window, but yes that is a large rock in the middle of that bedroom. 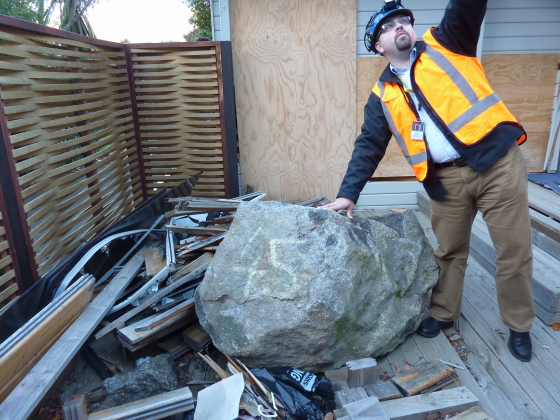 What happened is the rock landed here and bounced literally through the wall in the background into the bedroom.

We were told the rocks fall at around 90 km/hr but when they land and splinter, a shard can travel a several hundred kms/hr. So even a small shard can be fatal. 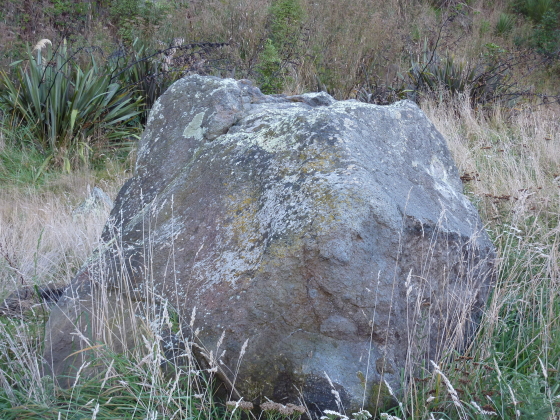 This rock had a cow underneath it. No it did not land on the cow, it caught it on the way down and splattered it at the bottom. I observed that if it landed on a human, you’d probably not even know there was a body underneath it.

Somehow a discussion eventuated about what would have happened if someone was, umm, being intimate with the cow when the rock struck it. The consensus was they would be very dead, or in great pain.

We ended the tour by going to the headquarters of SCIRT, the Stronger Canterbury Infrastructure Rebuild Team. They are the group rebuilding the roads, fresh water supply, waste water and storm water networks. It is an alliance of CERA, the CCC  and NZTA on the government side and Citycare, Downer, Fletcher, Fulton Hogan and McConnell Dowell on the construction side.

The scale of the work they have on is staggering. Off hand I think their budget is $2.5 billion. but instead of that being one big $2,5b project, this is around 500+ individual projects. Over the next few years I think 40% of the sewers will be replaced or upgraded. When they dig up roads, they are notifying utility companies, so one bright thing has been a lot of fibre or duct for fibre is being laid for little cost.

We finished the day watching the Crusaders play the Highlanders at the AMI stadium. The stadium is superb – you feel very close to the rugby. For a “temporary” stadium, they’ve done a great job. We were hosted by the stadium trust, in their box. At one stage the Highlanders scored a try and as a good former Dunedin resident I jumped out of my seat clapping and cheering. I then noticed that I was the only person in our area doing so, and the Mayor who was seated next to me gave me a very strange glare. I explained I went to Otago University and one has to stay loyal.

Overall it was a very enjoyable and interesting day. I think all the media found it so. The Press has a story online about some of their impressions. There is a lot happening, but the future is of course still unknown. The plan for the CBD is around half way through the 100 day formulation period, and it remains unknown how willing the large property owners and investors will be to build in the new CBD. However there are some confirmed tenancies which will help those decisions.

There were two things which struck me during the day. The first was how much time and energy is spent “fixing” things with the Council. Many many stories were told about issues where they have had to hurry or help the Council do something. Without exception these stories were told with respect for the Council. People often said that it is not their fault – the Council simply is not geared up to rebuild an entire city. They are staffed and structured for business as normal. They simply don’t have the staff, the experience, the flexibility and the funding to do much more than their core competencies.

Some politicians have called for the Council to be given a much larger role in the rebuild. I think this view is woefully misguided, and would be a disaster. I doubt the Council itself even has this view. They simply are not structured in a way where they could perform much more than what they currently do. This is not a criticism of them, just a reality.

The other thing that struck me was the intimate detailed knowledge CERA Minister Gerry Brownlee had on the city and the issues. Over six or more hours on the bus, he was peppered by questions, and could answer pretty much them all. At almost every location he could tell you what had happened, what issues had arisen, and what probably will happen. There were many stories about ministerial interventions to stop something bad happening by some entity. We’re not talking about use of official powers, but persuasion and yes diplomacy. With a rebuild of this size, it is not surprising that so many issues arise.

Now again some politicians have called for there to be a Board for CERA, and have the CEO report to the Board and the Board to the Minister. In my opinion that is also a very misguided and potentially disastrous idea. Apart from the fact there is no other Govt Dept that has such a setup, lets look at what would happen. The Minister would be a remote figure mainly based in Wellington deciding on recommendations from the board. The board would be a group of part-time directors who could only decide things when they formally meet every few weeks. Having a board would be near criminally stupid – it would remove the Minister from an active role, put in place some unelected directors who have no accountability, and slow things down massively. Most of all you would lose the ability of the Minister (and his associate Amy Adams who also showed a high level of knowledge) to perform that all important role of sorting out conflicts and clearing roadblocks.

As I said, the day was very interesting and I learnt a lot. I hope they do another media trip in a year’s time, when fingers crossed buildings in the new city centre will be starting to go up. But ultimately that will depend on if the private sector can get a return on any investment there.

NB – While invited by CERA, like all the other media I paid for my own travel down there.