In my Herald column I write about Labour’s proposed minimum pricing for alcohol.

Labour seem very reluctant to confirm what minimum price they are actually advocating. Lianne Dalziel twice stated in Parliament it should be at least $2 a standard drink. Her colleagues seem to want to ignore that, as seen below.

You can’t have it both ways and have your MPs get up in Parliament and say the law should be this, and then deny that is your policy – especially when the MP is your spokesperson on alcohol issues. 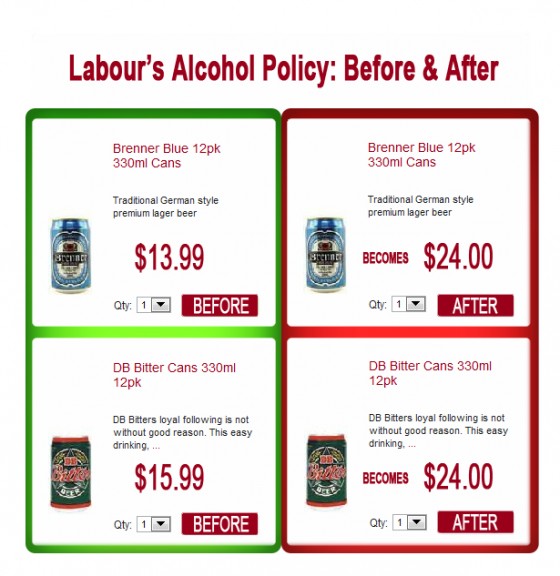 A reader sent me this graphic, which sums it up.

More usefully, Eric Crampton has an excellent analysis of minimum pricing. He states:

What would the world have to look like for minimum alcohol pricing to be a reasonable policy solution?

Suppose it is the case that harmful heavy drinkers, the sort that impose the greatest harms on others when they consume alcohol, really don’t care about the quality of the alcohol they’re drinking; they’re buying whatever product provides alcohol at the lowest price per standard drink. Suppose further that this cohort’s consumption is reasonably responsive to price measures: if you raise the price of the cheapest form of alcohol, you’ll do a lot to curb that cohort’s consumption while not doing much to reduce the normal consumption of moderate drinkers. Finally, assume that there’s little overlap between the kinds of alcohol consumed by harmful drinkers and that consumed by moderate low-income drinkers.

So minimum pricing is a good idea Eric says, if the above holds true.

Intuitively you would expect heavy drinkers to be less price sensitive.