A few weeks ago I got an e-mail, which after reading I instantly forwarded onto a few friends with the comment “Best e-mail ever”. It was from BMW NZ asking if I’d be interested in trying out some of their new BMWs and reviewing them on the blog.

I replied a few micro-seconds later saying that yes I don’t think I’d find that too unpleasant. In further e-mail conversation I suggested that it would be a waste to have a BMW and just use it in central Wellington, and asked if they would have anything suitable to take on a ski trip up to Ruapehu. BMW NZ came back with an X5 and .suffice to say I am looking forward to my ski trip.

But an even better e-mail followed. BMW said that as I like to go up in the snow, would I be interested in being part of the media group taking part in their BMW Alpine xDrive challenge. This involves flying to Queenstown, staying at Millbrook and spending a day up in the snow having top instructors teaching you to drive on snow, and then some slalom and drag challenges. My reply to that e-mail was more measured in nanoseconds than milliseconds.

So on Wednesday last week I flew down to Queenstown. Never flown there before (driven many times) and was surprised how large the airport is. 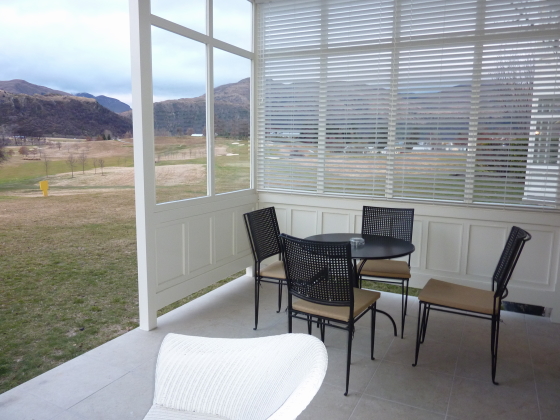 Millbrook is a very tranquil and lovely place to stay. First class service. This is the view from the porch area of my villa. My only regret is not paying to stay on an extra day at my own expense so I could have a round of golf there. 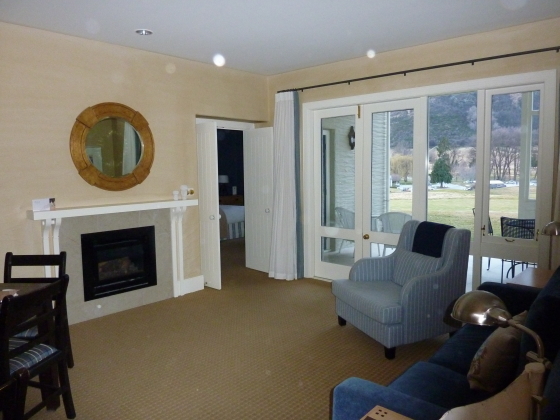 This is just the living room area – the bedroom is almost as large. 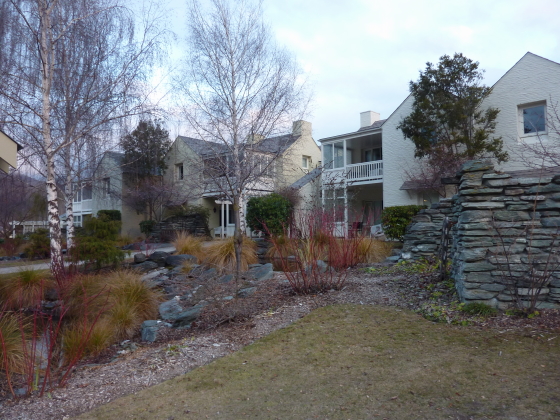 On Tuesday night we had a get to know you function and dinner. There were 17 media there in total – most of them driving or motoring drivers.

Had a 5 am wake up call the next morning as we had breakfast at 6 am and departed at 7 am. A bus took us over the crown range and then up the Waiorau Snow Farm Road in Cardrona Valley. On the way up we saw the statue of Possume Bourne whose fatal crash was on this road, which used to also be the road for the Race to the Sky. 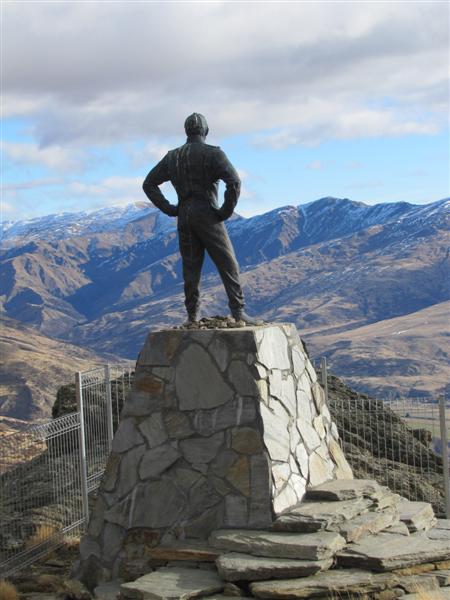 A great location for his statue. We then got up to the Snow Farm, which is home to the Southern Hemisphere Proving Grounds. This is the only facility in the world in the southern hemisphere where car manufacturers and the like can test their products in winter conditions. They spread out over a large number of tracks and areas, mostly behind fences so people can’t see the future models not yet released. 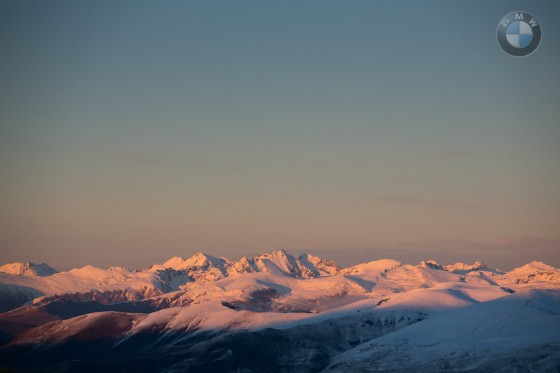 We were very lucky with the weather. It was a perfect day up there. Sun was out all day, and amazing views the whole day. They say we had the best day all month. 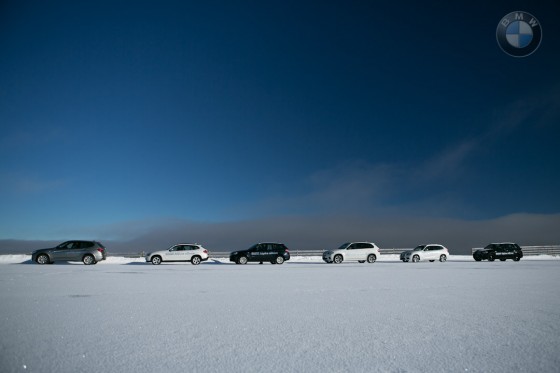 The high quality photos are from Simon Darby of Wanaka Photography.

I can not over-state how amazingly they handle the conditions. Their engineering allows the torque power to shift from front to back or even to one side only (if one side is one ice). At one point we drove at 60 km/hr and slammed on the brakes, and did a perfect stop with no sliding. The BMW Xs on snow brake basically as well as other cars on road. You’d actually have to try really hard to crash one (or turn off the stabilisation controls, as we did :-). 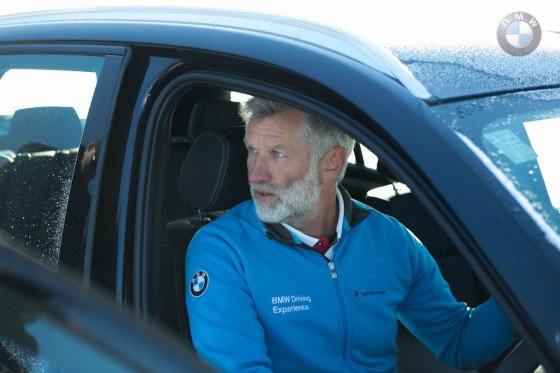 We had four driving instructors. Three who work for BMW NZ and Dieter (above) who is an international driving instructor for BMW, from Germany. Dieter trains security professionals up around the world and we were very fortunate to have him, on his first visit to NZ. He is also the most German German you could meet – as you found out when you stuffed up 🙂 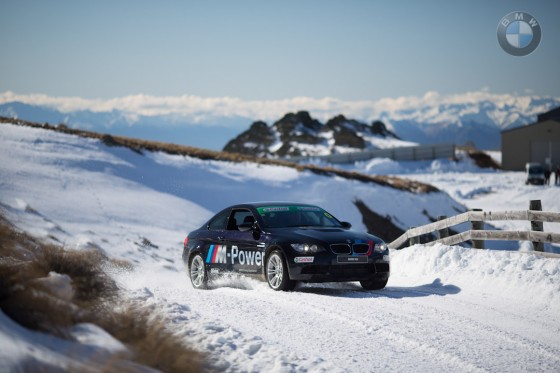 One of the many highlights of the day was when we did some hotlaps in the cars, driven by the professional instructors – with us as passengers. I’ve driven before on snow, and have driven before around tight corners and driven before at 150 kms/hr – but never all three at the same time. Semi-terrifying but great fun – and you actually always felt safe – they really know how to handle these cars. 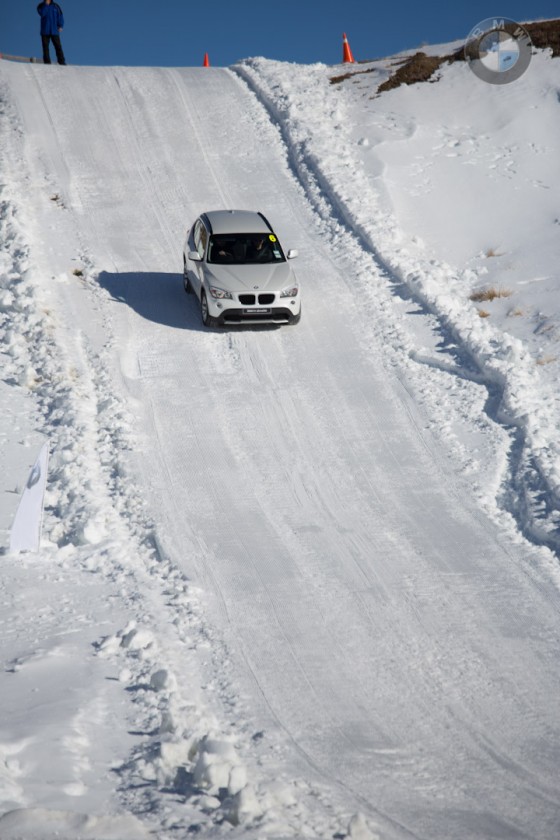 Going down the slope. The cruise control is so good that you just putter down at 5 km/hr. 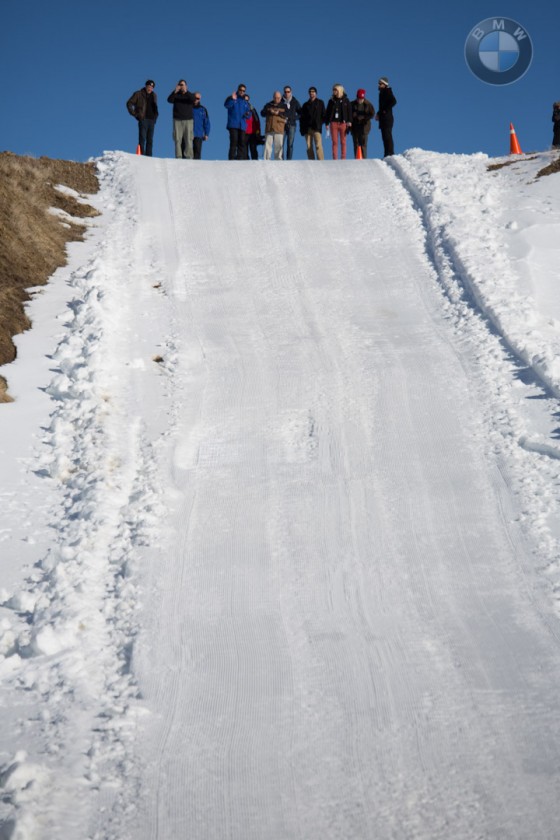 One amusing story from the day. One of the journalists was asked to try driving up the slope, and to get as far as they could before they start sliding backwards – the idea being the cruise control will then hit in.

However the journo managed to do what no one previously had managed and with a big lead up had enough momentum to make it all the way. Now imagine scenes of everyone at the top looking down suddenly diving out of the way and then the BMW jumping many feet into the air at the top in the best Dukes of Hazzard style. Some of the other BMWs were parked at the top (as no one had ever made it up) and it was a bit of a close call than there wasn’t a squashed car or two! 🙂 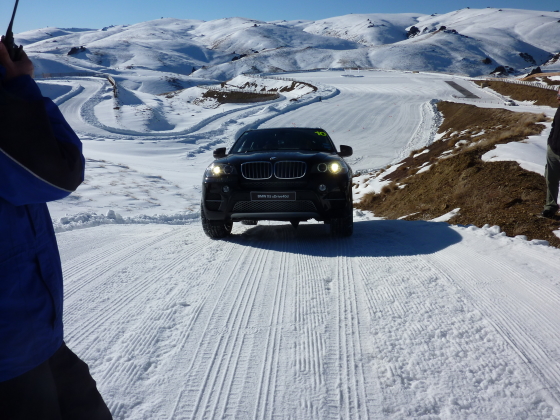 After we all had a go driving down the slope, a couple got to try reversing down. 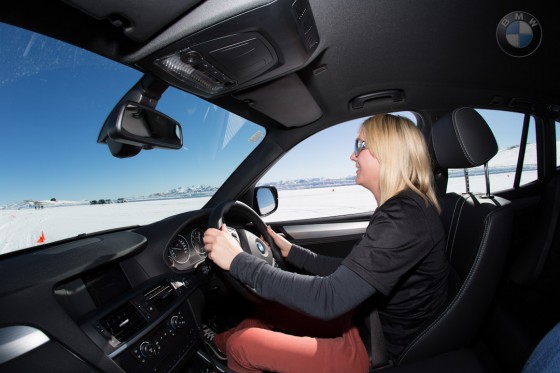 Hayley Holt from The Crowd Goes Wild. She’s just as cool in real life, as she is on the screen. Highlights of Hayley’s driving were on TCGW on Friday night. You can see it on iSky here. 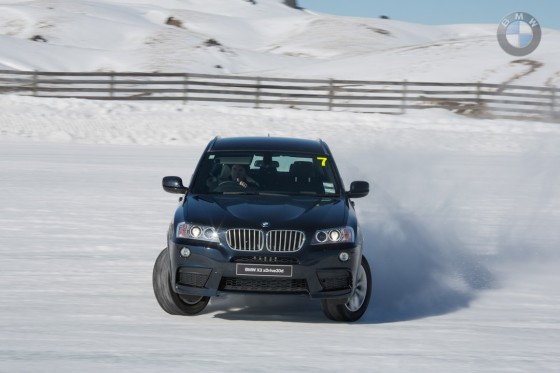 We got to do loops around a circle. You basically spend most of your time sliding and turning to correct over-steer and under-steer. Is actually pretty tiring stuff! 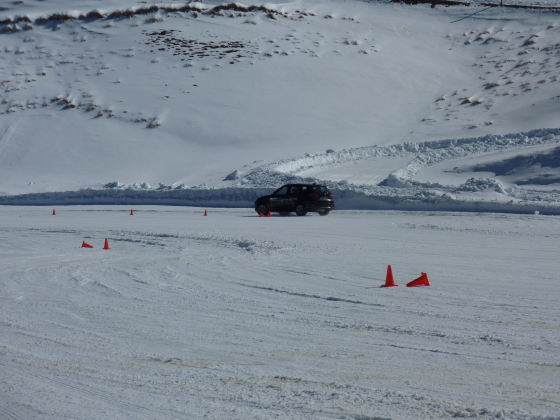 We spent a lot of time doing slalom courses. In the morning session I was amazed to discover I actually got the fastest lap time in my group. Was pretty pleased with that. Sadly I spun out just before the finish line in the afternoon slalom. 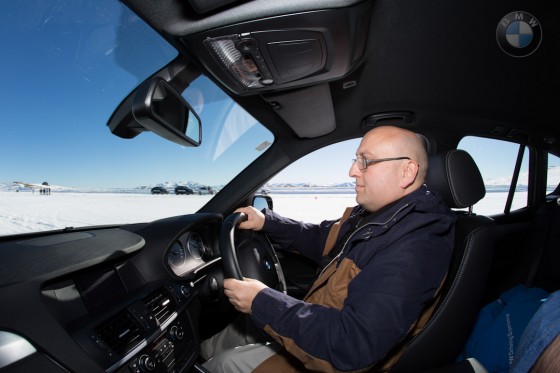 If I look a bit intense in this photo, it is because it was taken during the slalom course. 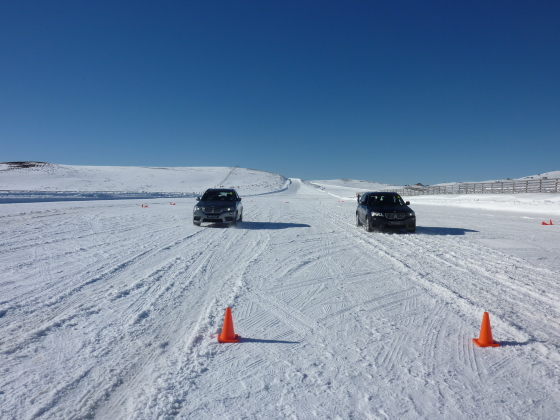 We had lots of fun doing drag races between crews, swapping cars every few rounds so you got to try all four models there. 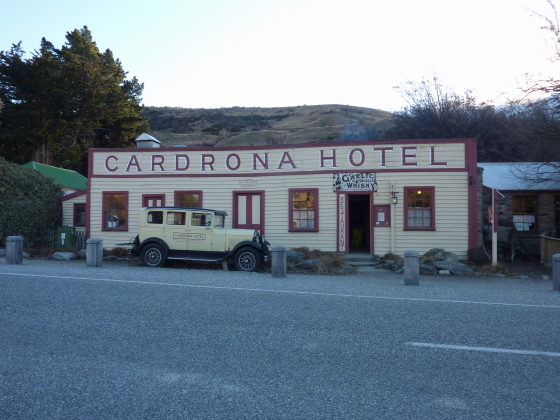 How better to end the day than with Speights at the Cardrona Hotel. Actually the day did not end up there, but with an awards dinner back at Millbrook. 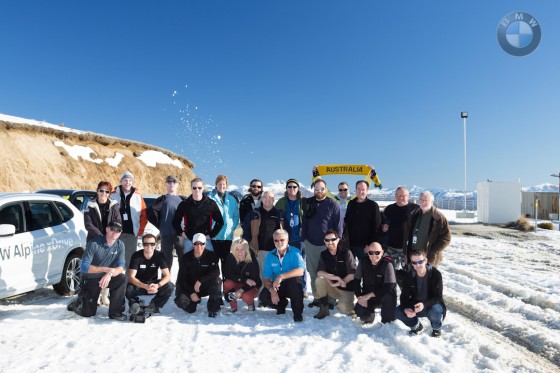 The team photo. Was a great bunch of people, and enjoyed meeting them all. Special ups to Dave L, my co-driver for the day.

It was an amazing experience, and big thanks to BMW NZ for the experience. Their cars were just amazing to drive and handle.