I blogged in August how I ended up driving BMWs on snow for a day. It all came about from BMW NZ asking me if I’d like to review one of their cars. In the nano-second it took to me say yes, I mentioned a ski trip planned for September, and so resisted the temptation to grab a 7 series, going for a BMW X5 M50d. 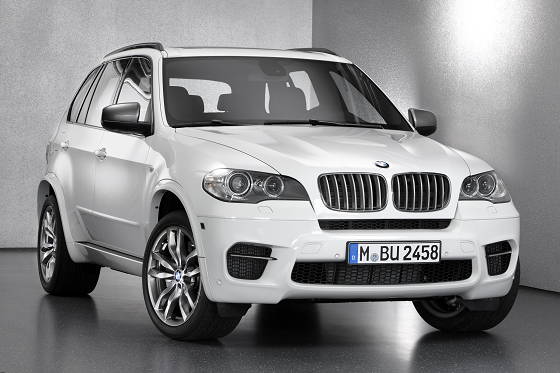 Above is the promo shot. The one we got through Jeff Gray BMW in Wellington is below. 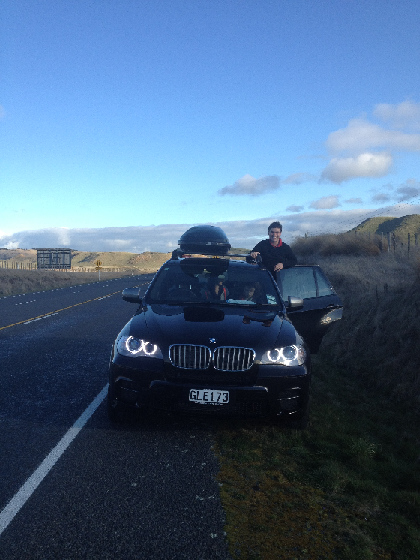 Five of us travelled up from Wellington in it, meeting four more friends travelling down from Auckland. The X5 fitted in five people easily, and the boot area is actually pretty huge. It fitted in five suitcases plus some extra gear. The roof rack was for the three pairs of skies, two snowboards, ten boots, six poles etc!

So how was the car overall? I’ll get into details down below, but I have to say that far and away it was the safest car I have ever driven. X5s are not cheap, but I now understand why people will pay that much for a car, if safety is a concern for them.

I’m not someone too fussed on the stats of a car, as I prefer to go on how it actually feels to me. But for those who do like the numbers the X5 is a 3 litre V6 triple-turbo diesel with automatic 8-speed transmission. It has 380 horsepower and 740 Nm torque.

First thing I noticed in the car was that the speedo wasn’t just on the dashboard but a digital display of your speed is reflected onto the windscreen in front of the driver. This is actually massively helpful as it means you can see your speed, without ever taking you eyes off the road ahead. In a powerful car where you can accidentally exceed the speed limit by cruising, this means you won’t. Any speeding will be quite deliberate.

Also when the GPS is switched on, the instructions for the next turn are also displayed on your windscreen. I love GPS navigators but having to look at them from time to time can be a bit dangerous. When the instructions are directly in your line of sight, it means you never take your eyes off the road ahead.

In terms of actual driving, it handles magnificently. You know how sometimes you may go around a corner a bit too fast and feel the car just struggling for control a bit. The stabilizing technology in the X5s meant that not once did the car feel like it could even potentially be out of control.

I need to be careful here. When talking about speeds I will say we did 1×9 kms an hour. For the purposes of the NZ Police, the Ministry of Transport, the NZ Transport Agency and Transport Minister Gerry Brownlee x = 0, so we never did  over the tolerance of 109 kms an hour.

Others may insert their own value for x and find they may not be wrong.

One of the best things about the X5 is how safe and easy it makes overtaking. It accelerates from 100 kms per hour to 1×9 kms per hours in barely a second. You fly past the car you wanted to overtake and are back on the correct side of the road so promptly the ongoing traffic is still hundreds of metres away. I’m not suggesting we did any over-taking which we would have not done in other cars – you never want to be on the wrong side of a miscalculation.  What I’m saying, is that the just makes over-taking less of a stress – you just decide it is safe to go, floor it (not literally as otherwise you will take off), and bingo you’re back on your side of the road.

The X5 is not so much a car, as a computer with wheels. In a couple of years with the help of Google, it will probably drive itself. A lot of cars now have cruise control and the like – a very good way to avoid speeding tickets also. They’ve designed it so you can do most of what you want to from the steering wheel, so no fiddling with the dashboard. Also as everything is via the one computer, they play together nicely. If you are playing music from your iPhone, and the GPS has instructions for you it pauses the song while it tells you of the next turn.

The rear view camera that shows you the angle you need to reverse into a tight area is bloody handy. Also it has sensors to warn you if you are both going to reverse or move forward into an object.

Oh yeah, most of the computer commands can be done by voice also. Don’t need that so much when travelling with others, but definitely useful if by yourself. All part of just having that safety focus.

The heated front seats were bliss after a day’s skiing.

Driving up both Whakapapa and Turoa was a cinch. I’d previously tried an X5 (with snow tyres) on actual snow and ice, so on an actual road (albeit one with some snow) was very unstressful. 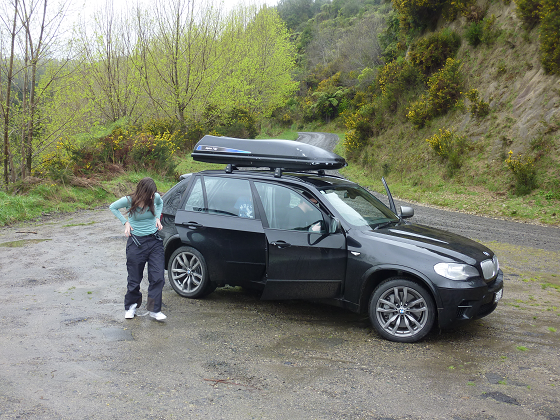 After Turoa closed early on the Sunday, we decided to head back via a very scenic route – the Whanganui River Road. Was beautifully scenic, and a few of us are talking about canoeing it over summer. The photo above shows us stopping to enjoy a view. The road was a good one to test the X5 out on – not always sealed, wet and windy.

So was there anything bad about the car? Well the person in the rear centre seat said it was a bit uncomfortable (as that seat often is), and working out how to open the glovebox actually required an engineering degree (or a phone call to BMW – there is a not so obvious button for it). But as you expect with a car in this range, it is hard to find a lot of faults.

But if in a few years I was earning enough money to afford a car in that price range – my answer would be hell yeah. As I said, I’ve never felt safer in a car – even when driving at 1×9 kms an hour 🙂